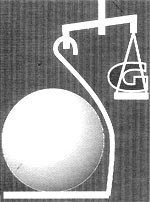 ANYONE even vaguely familiar with equations of physics, would recall the universal gravitational constant, denoted by the letter G. Besides G, there are several other physical quantities which govern the strength of interactions between the elementary particles of matter and are 'deemed to have a fixed value. These are generally referred to as fundamental constants. Paradoxically, these fundamental constants could show a variation.

Even as long ago as 1937, physicist P A M Dirac noticed that these constants could have a spatial and temporal variation with prof6und consequences. Now, J D Prestage and his collaborators at the Frequency Standards Laboratory at the California Institute of Technology report a new test - using clocks based on the vibrations of different alkali atoms (like cesium and mercury) and H-maser (hydrogen maser) clocks - which they claim has improved the laboratory limits on the time Yariation of a fundamental constant - the fine structure constant - by about 100-fold over the previous measurements (Physical Review Letters, Vol 74, No 18).

JA Recently, some of the cosmic theories also predicted a varying fine structure constant, giving a fresh impetus to the whole field. Changing gravitational and fine structure constants will have profound effects on our universe. For instance, even a small departure from the present value of G will make the Earth inhospitable to life.

This has led some scientists to develop the anthropic cosmological principle, which states that the present values of the constants is a small subset of the possible values. Any other values for these constants will lead to the universe evolving in a completely different fashion - for instance, that universe could be too young for life (and hence astronomers!) to evolve.