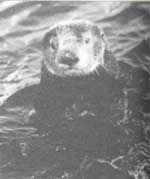 A CLASS of pesticides called polychlorinated biphenyls (PCBs) has pushed European otter to the brink of extinction. A Dutch study now reveals why: PCBs have a serious effect on this aquatic animal's reproductive cycle. PCBs have also been known to cause patches on the skin, immunotoxicity, kidney damage, weight loss and tumour formation in otters.

Otters get exposed to PCBs when they consume contaminated prey such as fish. However, no toxicological studies have been carried out on otters and the indications of possible pathological effects of PCBs are based on purely circumstantial evidence.

Dutch researchers from the Institute for Environmental Studies in Amsterdam have especially pointed to the near-extinction of an otter species, the Lutra lutra, in the Netherlands and an otter census in southern Sweden that revealed that their population had decreased sharply.

The researchers have shown that the average PCB levels in otters seem to be the highest in areas where the species is declining. And normal otter populations are linked with low mean PCB tissue concentration -- below 30 mg/kg of fat. Thriving otter populations are associated with a dietary intake of less than 0.026 mg/kg of PCB; if, on an average, 0.05 mg/kg is taken for an extended period of time, reproductive problems are sure to occur.