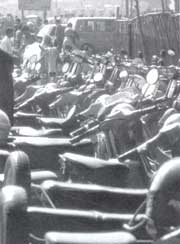 THEY are small and they are Asia's lifeblood. What are we talking about? The omnipresent two-stroke engine. Throughout the continent, these provide low-cost transportation to millions but, ironically, they are killers. The cloud of thick blue smoke seen often in crowded city intersections throughout the region - Delhi, Bangkok, Taipei, Hong Kong - is its tell-tale sign. The pollution levels across the continent give further proof ofthe traditional two-stroke engine's effects on environment and health. But Orbital Engine Corporation, an Australian firm, plans to change the two-stroke engine's performance very soon. The firm, specialising in combustion engine technologies that cut down on harmful emissions and improve fuel efficiency, has recently sold its patented "Orbital Combustion Process" to two major Asian two- wheeler manufacturers.

The first, China's Hainan Sundiro Motorcycle Company is a publicly listed firm that produces about 600,000 two-stroke bikes each year. The other company, who plans to market the Orbital emission system in its two-wheelers within a year, does not want its name to be disclosed at this point. "They want to sneak up on their competitors," says Ken Johnsen, executive director of business development for Orbital Engine in Perth, Australia.

The Orbital Combustion Process is an innovative, low cost method of injecting a highly atomised fuel directly into the combustion chamber of a two-stroke engine for an efficient, environmentally-friendly burning of fuel, instead of sending it along a circuitous route through an intake manifold where raw fuel is lost along the way and what is left in inefficiently, toxically burned.

According to Johnsen, using the Orbital emission system in two-stroke engines can reduce harmful emissions by as much as 90 per cent. It can also reduce fuel consumption by about 40 per cent as the system allows the fuel to burn more efficiently.

The beauty of the system does not end with technology. Its the cost. Johnsen says the Orbital system can be easily incorporated into an existing two-stroke engine by making only "minor modifications and small tooling changes" on the assembly line. The cost of the actual injection mechanism works out to be US $80- 100 per two-wheeler. "Orbital gives the manufacturer the ability to maintain a fixed investment in two-stroke technology," Johnsen says, and also allows him to rejuvenate or upgrade it to meet various emission norms by a fairly simple modification."

Because of the 40 per cent savings on fuel, Johnsen believes that even if the manufacturer's investment in Orbital technology is passed on to the consumer, he can recoup it within 18 months.

But can the system really make any noticeable difference to Asia's foul air? "It could," Johnsen says, "but it won't happen overnight. It will take about three to five years to phase it in, that's the normal replacement cycle of these machines. First, a society must purge itself of the old machines.