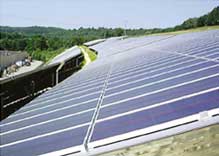 in late October, this year, the European Commission (ec) came out with contradictory policy decisions on its commitment to promote renewable energy technologies. First, it announced its intention to create an international risk capital fund of about us $128 million, which would encourage private investment in renewable energy and efficiency projects in developing countries. Within a week, the Grand Duchy of Luxembourg was put on notice by ec on its policy of compensating customers for the price difference between green power from renewable energy facilities, and the electricity generated using traditional fossil fuels. It was asked to stop the practice immediately.

The ec accused Luxembourg of engaging in "market distortion" and contravening eu policy.The European Environmental Bureau (eeb), the largest coalition of environmental groups in Europe, has criticised ec for issuing this warning and wants that rules on trans-boundary transactions which support development of renewable energy be modified. "The commission seems more concerned with protecting major power generators, to the detriment of the overall environment," says John Hontelez of eeb . The bureau considers this attitude "incompatible" with sustainable development and says that the Commission's warning goes against a fundamental eu aim of encouraging sustainable development and undermining the objectives of the Kyoto Protocol.

The new fund, known as the Global Energy Efficiency and Renewable Energy Fund (geeref), is expected to "accelerate the transfer, development and deployment of environmentally sound technologies". geeref seeks to provide new risk-sharing and co-financing options for international and domestic commercial investments, and will invest in a broad mix of renewables and efficiency technologies with priority to environmentally sound ones with a proven technical track record. It will stimulate creation of sub-funds to cater to regional needs and conditions, rather than investing directly in projects.

The ec has appointed Triodos International Fund Management and E+Co, two public purpose investment companies, to facilitate geeref in co-operation with the European Investment Bank, European Bank for Reconstruction and Development, and other groups. It has asked the European Commission, European Parliament and other stakeholders to comment on the initiative and to endorse the ec's aim of reaching the initial funding target by the middle of next year.