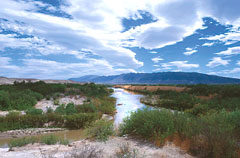 The simmering water dispute between Mexico and the us seems to have been finally settled. The border countries reached an agreement under which Mexico will release about 111 million cubic metres of water into Rio Grande river for use by Texas farmers. This is six per cent of the water it owes to the us. As per a 1944 treaty, water at the point where Mexican tributaries reach the Rio Grande is to be allowed to flow downstream, with one-third earmarked for south Texas and two-thirds assigned to the Mexican state of Tamaulipas. The us, in return, agreed to divert 215 thousand hectare metres of water out of Colorado river into Mexico each year. In 1992, Mexico defaulted and accumulated a water debt.

The recent release of water by Mexico has helped ease growing tension in the region. Even though Texas water officials have criticised the deal saying it falls short of what the state's farmers need, Texas governor Rick Perry has welcomed it. "This is a good first step. It will help the farmers and producers make it through the summer and offers hope for future water releases," he said.

For the first time, the two countries intend to jointly invest around us $210 million over the next four years in irrigation, water conservation and in measures aimed at providing sustainability to the region. Mexico proposes an investment of us $154 million to finance projects that would improve the efficiency of water use in the border cities.