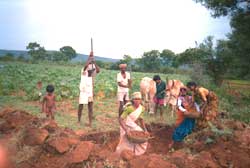 the Andhra Pradesh (ap) Water, Land and Tree Act, 2002, meant to clamp down on over exploitation of groundwater, could lead to increased bureaucratisation, fear some experts.

To come into force on June 1, 2002, the act is meant to promote water conservation and prevent over-exploitation of water sources in the state. A powerful authority constituted under the act will implement the rules and provide technical guidance. It will be headed by the ap minister for panchayati raj and will include three members of the legislative assembly, three government nominated technical experts besides various others.
The act requires all owners to register their wells (including those not fitted with power-driven pumps) and water bodies with the authority. It also bans sinking wells within 250 metres of a drinking water source except for irrigation and drinking purposes.

Also, on the advice of technical experts, the state authority can declare a particular groundwater basin as over exploited. It can ask for closure of existing wells and prevent sinking of wells except for drinking water purposes for a stretch of at least six months in such regions. While the act provides compensation for closure of wells, Purshottam Reddy, head of the department of political science at Osmania University, Hyderabad, says, "The closure of wells can have grave implications on the fundamental right to livelihood."
According to the act, local bodies, like municipalities can now approve the construction of buildings with not less than an area of 200 square meters only if the plan has appropriate rooftop or rainwater harvesting structures. The act also empowers the constituted authority to issue guidelines to local bodies for providing incentives for constructing such structures and for recycling and reuse of water by industrial and commercial users. But it is not yet clear whether these guidelines will be mandatory or not.

Besides, providing a legal framework for reducing water pollution, the act also aims to protect the tree cover in the state. This act repeals the earlier ap groundwater (regulation of drinking purposes) act, 1996.
Under the act, district and mandal ( block) level authorities can also be formed with powers of the state authority devolved to them. However, as the final decision for the creation of such bodies rests on the state authority experts fear that it might lead to centralisation of power. Says Ramaswamy Iyer, retired secretary of the Union ministry for water resources, "The act is well-intentioned. But whether it will lead to greater bureaucracy and centralisation of authority is as yet an open question."

According to P K Jha, additional secretary in the ap ministry for panchayti raj and rural development, though the present act devolves more power to local authorities formed under the act, it is as yet unclear whether local committees will remain recommendatory bodies with the designated (government) official taking the decisions.

Public participation in the authority is limited to a nominal representation in terms of five members. These five people are also to be state government nominees. "Community awareness does not seem to be a priority. The powers vested in the authority for giving directions and levying fines gives an impression that it is meant to be a 'green police' rather than a 'green manager'," says V R Sowmitri, programme manager for the ap Non-governmental Organisations Committee on community forest management.