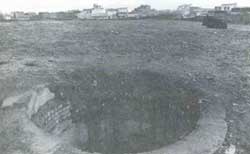 VIDYAVATI is a happy housewife today. Free cooking gas runs in her kitchen through the day. A 3-inch cement pipe, reaching down 10 feet below her kitchen and into a garbage dump brings gas to her. But her happiness could be short-lived. Recent incidents indicate that she and her friends, residing in the Vidya Vihar hutments of west Delhi, could be cooking disaster.

The gas flowing from the kitchen outlet, or chulha, cannot be regulated. To quell the fire one has to sprinkle water over the mouth of the pipe. If this fails, there is no option but to let it burn out on its own. This is clearly a dangerous proposal in hutments made of highly combustible materials which could easily burn to cinders.

Until 3 years, ago the Municipal Corporation of Delhi (MCD) had been using about 4 sq km of land here as a garbage dump. The occupants of the row of 6 hutments have now raised and extended their backyards with rubble.

The gas was a chance discovery. Two years ago, Mohan Singh, a lorry driver living here, was trying to douse the flames after burning a small pile of garbage outdoors. But his efforts came to naught. A gas leaking from the ground itself seemed to be fuelling the flame. Singh soon started tapping the source. He sent a tube right down into the garbage dump behind his home. The gas flowed in through a tube and burnt with a blue flame. It was methane.

Solid wastes deposited in landfills degrade chemically and biologically to produce solid, liquid and gaseous substances. Biological activity within a landfill first results in aerobic decomposition. Anaerobic decomposition sets in once oxygen supply in the pit is exhausted. This produces organic acids, carbon dioxide, nitrogen, ammonia and sulphates of iron, manganese and hydrogen. A substantial amount of methane is also produced.

Mark Paul, an expert on biogas and other rural technologies, and working with the Delhi-based NGO, Action for Food Production, says, "Garbage dumps have a high concentration of methane. In confined spaces, it could be poisonous to humans, or even be a fire hazard." In fact, poorly-capped landfills have been known to be a major source of fires the world over.

The residents are aware of this, but ignore the dangers. Vedprakash Singh, Vidyavati's husband, says, "It is dangerous because we cannot regulate the flame. But we are careful." Kamal, their 13 year-old son, had his face charred when he thoughtlessly leaned over the chulha and lit a match. "It took several months, and a lot of money, to get him treated. Now he is alright." The lesson has gone unlearnt.

The MCD is oblivious to all this, saying it has never heard of this practice. It denies any reports having reached its offices of any such unexplained fires. "No accidents or fires have been so far reported from any of the 5 landfills around Delhi," says C M Vij, director, Conservancy and Sanitation Engineering Department. But his engineers are yet to check out recent reports, he adds.

Fires do break out frequently. But the residents are unwilling to do anything which will deprive them of this luxury. Once, they recall, an abandoned well had suddenly burst into flames and burnt for 2 days.

A charpoy lying in Siddheswari Devi's backyard had mysteriously caught fire and was gutted. But her attitude is typical of people in the clutches of poverty and ignorance: "Earlier, we endured the oppressive odours. Children would fall ill frequently. Visitors would run away. But now the air is cleaner, and we can offer tea and roti to our guests."

Small comfort in a city that is callous about the basic needs or the safety of its poorer residents, who are forever living on the edge.