This genetically modified plant is a marker of discontent 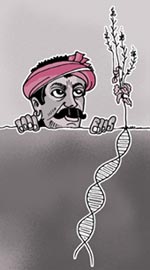 mustard, an integral part of Indian cuisine, has now become the subject of a raging controversy in the top echelons of India's scientific establishment.

In the last meeting of geac held in the first week of November 2002, the proposal was not cleared. "A decision was deferred as there were some more dilemmas to be resolved," says A M Gokhale, chairperson of geac. However, he ruled out the possibility of carrying out further trials citing two reasons -- "there is no time for that" and "enough data has been collected".

The hybrid mustard varieties developed by ProAgro are claimed to be capable of giving 17-25 per cent higher yield than the best performing varieties currently cultivated in India. Two mustard varieties -- varuna and kranti -- with a yield of 2-2.25 tonnes per hectare (under irrigated conditions) are so far the best mustard varieties available in the country. They have been developed by New Delhi-based Indian Council of Agricultural Research (icar).

geac's decision to procrastinate on the approval for commercial release of gm mustard has raised several doubts, with a section of the scientific community loudly questioning whether adequate open-field trials have been conducted to find the adverse effects of gm mustard. ProAgro claims to have conducted 70-75 field trials across five states in the last four years. On the other hand, on behalf of the government, Bharatpur-based All India Coordinated Project on Rapeseed-Mustard has carried out trials at only four locations.

ProAgro had accessed the genetic hybridisation technology it used to develop the transgenic mustard from Belgium-based company Plant Genetic Systems, which is now a part of Bayer CropSciences. Bayer holds the patent over the technology, which is already being used to protect rapeseed canola (Brassica napus) in some developed countries. The technology uses 'bar-barnase-barstar' bacterial gene system, which makes canola tolerant against herbicides used widely in developed countries to fight weeds.

The technology assumes importance in India as the mustard yields have reached a plateau. This is because unlike all major food crops there are no commercial hybrids available for the crop. The reason is an absence of a natural hybridisation system to develop commercially viable mustard hybrids.
Hybridisation essentially involves crossing two genetically dissimilar plant varieties and then exploiting heterosis or hybrid vigour (favourable traits of either parent) often seen in the first-generation (f1) progeny. Due to heterosis, the hybrids are able to yield more.

In the case of the bisexual mustard plant, however, hybridisation is difficult because of absence of what scientists call suitable cytoplasmic male sterile (cms) parental line -- a system in which the male organ stamen is sterile. "In mustard, there is no natural cms-restorer system. As a result, the f1 hybrids exhibit floral abnormality and they are not 100 per cent fertile," explains Paresh Verma, director (research), ProAgro.

To develop a hybrid, scientists usually use a technique that relies on identifying or developing cms parental lines and crossing these with a 'restorer' line (which is male-fertile). ProAgro has utilised such a technology for mustard, by employing the 'bar-barnase-barstar' bacterial gene system. For this, varuna and kranti varieties have been used as parental lines.

While insertion of 'barnase' gene leads to sterile anther (male part of the flower), the 'barstar' gene restores the fertility of the progeny at a later stage (see: Gender bender). The 'bar gene' has been used as a marker to trace the movement of the inserted gene system. Since the bar gene is known to impart tolerance in plants against glufosinate ammonium herbicide, it is inviting controversies. "Bar is an unnecessary insertion because Indian farmers do most of the weeding manually," says Suman Sahai, convener of Gene Campaign, a New Delhi-based non-governmental organisation (ngo). On the other hand, ProAgro asserts that since glufosinate ammonium is not registered in India and thus not used, there is no question of bar gene being able to express itself. However Devinder Sharma of the New Delhi-based ngo Forum for Biotechnology and Food Security claims that glufosinate is being widely used in tea plantations across the country. Interestingly, the worldwide marketing rights for glufosinate rest with Bayer -- ProAgro's parent company.

According to Deepak Pental, head of the genetics department of University of Delhi, south campus, marker genes may pose problems as very few studies about their toxicological affects have been conducted. This is because they do not have any agroeconomical importance. In fact, Pental's team, that is also working on a transgenic mustard variety, has succeeded in doing away with the marker gene.

Research on gm crops has been riddled with controversies ever since bt cotton was given the green signal for commercial cultivation. Groups campaigning against the introduction of gm crops question the process at two levels: first at the technological level, which they say is inferior and useless in Indian conditions, and second at the policy level since the government bodies lack transparency in their functioning.

Experts say that commercial cultivation of mustard would prove disastrous, as it can genetically contaminate wild mustard varieties in the eventuality of cross-pollination with the hybrids. "Furthermore, the ProAgro variety has a lower yield in comparison to varuna and kranti varieties," alleges Sahai. However, Verma says the data collected from field trials can easily counter these allegations.

Arguments for and against the gm crops notwithstanding, the risk of genetic contamination looks real. As per the guidelines of the review committee on genetic modification (rcgm) and geac, an isolation of 50 metres was made mandatory around the trial plots as a safe distance to prevent pollen from flowing to non-gm plots. But the anti-gm groups allege that pollen flowed up to 75 metres during the ProAgro trials, which resulted in environmental contamination. icar trials have confirmed this. "During our trials, the pollen flowed 50 to 75 metres away from the trial area," says Mangla Rai, deputy-director-general of icar.

According to Verma, these fears are uncalled for. "Pollen transportation is natural and in fact desirable for the development of new varieties. The pollen will not have any impact on the genetic system of recipient plants," he says. But Rai begs to differ. "Are they saying a gene introduced for male sterility will not have any impact on other natural varieties?" Experts working on transgenics also aver that cross-pollination does not happen so easily. "Firstly, it only occurs between closely related varieties and secondly, there are natural barriers to check that," says K C Bansal of New Delhi-based Indian Agriculture Research Institute (iari).


One way out is technologies like the plastid transformation. Scientists world over, including at the iari, are at present analysing the technology. Unlike the method used by ProAgro, plastid transformation involves manipulation in the genetic material of plastid (the pigment-bearing part of the cell such as the choloroplast) and not in the plant nucleus. Plastids are inherited maternally, which means they are only passed on to the female reproductive organ of the next generation. Therefore, they are not present in the pollen of the next generation. This is significant. If the genes are not present in the pollen, there would be lesser chances of them escaping into the environment. "The technology would end the debate shrouding cross-pollination by transgenics," says Bansal.

Considering this, would it not be prudent to wait for the technology to be developed? No, asserts Bansal, adding that a higher yield in mustard is a much bigger incentive for the farmers than fearing cross-pollination, which is an exception and occurs rarely.

However, the anti-gm lobby asserts that technology is not a solution to lack of transparency in the functioning of government bodies. "As was the case of bt cotton, the government is not putting data pertaining to field trials in public domain," says Sahai. At a recent press meet, she demanded constitution of an independent panel, consisting of senior government scientists not engaged in transgenic research, to review the reports furnished by ProAgro.

With allegations and counter allegations flying thick in the air, it will be interesting to see how the government handles the issue. geac is expected to meet again early December to take a final decision on the fate of ProAgro's transgenic mustard.