CoP 11: No consensus on resource mobilisation

Jayanthi Natarajan hopeful of Parties agreeing on a final document 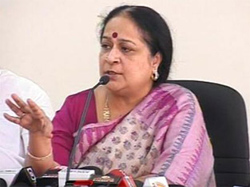 Parties to the Convention on Biological Diversity (CBD) failed to reach any consensus on resource mobilization on the first day of the high-level segment negotiations during the CoP 11 at Hyderabad on October 17. Developed and developing nations disagreed on ways and means of mobilizing resources to protect biodiversity.  India’s environment minister Jayanthi Natarajan was, however, hopeful of countries agreeing to a final document by the end of the conference.

In a press conference, Natarajan said: “There have been difficult discussions on a few issues relating primarily to resource mobilization, financial mechanism and biodiversity and climate change, which is natural in any negotiations. There are few logjams in the ongoing deliberations, most of them because of differences in perspective, but I am happy that the discussions have progressed from CoP 10 on all of these issues this week.” She added that all countries are willing to work towards mutual agreed solutions on biodiversity and on four of the agenda items; the plenary has already adopted major decisions.

She said that on the issue of pledging funds for conservation of biodiversity by different countries, India is not looking at the numbers but at a political message and political commitment from the developed world. As far as India is concerned, the government is spending over US $2 billion under different components of various ministries for biodiversity conservation, she said. The minister added that discussions on resource mobilization would be wrapped up by Thursday night.

She also referred to Prime Minister Manmohan Singh’s announcement on India ratifying the Nagoya protocol and launching the Hyderabad Pledge, adding that India had become the seventh country to ratify this protocol.

Natarajan said that the joint high-level group of India-UK had drawn up estimates of $130 to $ 430 billion for resources, but she was not ready for any commitment of numbers. “I don’t want to commit myself on any numbers. There is no comparison between what is required and what we are looking for.  Right now we are just looking for political commitment from delegates for Aichi Targets,” the Indian environment minister added.