That time is not very far off when children will ask: when are we buying a CD recorder, Papa? 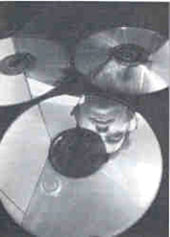 A WHOLE new world of recording on a blank compact disc (CD) is now emerging. Researchers in Japan and The Netherlands are working on the concept of using a CD recorder at home to copy favourite music tracks on blank CDs or record film sequences on blank video CDs.

Hi-fidelity cD recorders exist. But they are priced at several lakhs of rupees each, while blank CD discs cost about Rs 400. The blanks are the "write once" type, which means they cannot be erased and reused. Erasable CDs also exist. High-end personal computers use them for mass storage or back up of data.

There are 2 different types of CD recorders. Neither will work with the laser optics in ordinary CD players. Consequently, all the leading electronics, chemical and tape companies have been trying to make an affordable erasable CD that will work on existing CD players.

Reports in Britain and Japanese publications, detailing these advances, state that several years ago, Tandy computers had claimed to have a blank disc that would do the trick. Called Thor, it was to be coated With a mix of dye materials which changed their optical character when hit with laser light. Hit again, their original state was restored. But Thor never saw the light of day.

TDK, the Japanese tape company, is reaping some success with reversible dyes, but it admits that the erase facility will work only a limited number of times. So the disc uses a tape which can be erased and re-used only a few dozen times.

The evolution of recording on a blank CD involves working With several kinds of discs, each serving its own particular purpose. The personal computer is the Trojan horse that is driving recordable CD into the livingroom. It takes a long time because record, film and computer industries have completely different cultures. The record companies and film studios see home copying of music and films as a threat.

The idea of consumers using a CD recorder to copy favourite music tracks or, with the plans for video CDs, film sequences, is obviously anathema to copyright owners. It also explains why hi-fi CD recorders are so expensive, and targeted at professional users.

Today's floppy disks do not have enough storage capacity to work as mass back-ups. Streamer tape is slow and Clumsy. SO, CD recorders are being sold for computer use and there is a race on to drive the price down.

CD recorders for PCs now cost less than us $1,500 in us, and the price of blank write-once discs is falling to about us $9. But, prices of both are expected a halve within 2 years.

A computer software is already available in the market that lets a recorder make copies of music or video tracks from a pressed cD on to CD, which then plays on an ordinary domestic player.

A new high-tech development in the electronics industry has emerged where companies are now demonstrating new high-density versions Of Co. Pre recorded discs will be able to store a full length film on a single side of a disc, with broadcast quality pictures sound or as much computer data as sex eral conventional CD-rom (read-only memory) discs.

Modern PCs are designed to play multimedia CDs that mix data, music and video. The prospect of stopping a recorder from copying music and video disks while still letting it copy computer data, seems remote.

Audio and video tape, and floppy discs, are now so cheap that it is often easier to use a new one than to check content of used media and take a dec sion to erase. If blank write-once CDs cheap enough, the same model appbeL With the right marketing strategy idea of paying a few hundred rupees extra for a disc that will erase a dozen times might well appeal to the consumer. 1!

For computer applications, there is much to be said in favour of no erasable discs. If it is used to back-up large quantities of database or sheet files, the last thing the owner wants is the risk of erasing in error.

For applications where erasability becomes necessary, for instance,,the temporary storage of data that is contain ually being updated, the computer industry is moving in the direction or phase-change recording. This works more like a tape recorder which can overwrite one recording with another without first having to erase it.