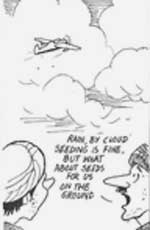 After reports of the success of cloud seeding in the US, Australia and the Philippines, Union agriculture minister Balram Jakhar has become a strong votary of the practice. "There is no reason why cloud seeding cannot become a major component of our dry-land farming programmes," he says.

The Indian Council of Agricultural Research (ICAR) has been instructed to identify rain-shadow areas for the large-scale cloud-seeding programme, scheduled to begin next year. A special unit consisting of scientists from the ministry, the Indian Meteorological Department, the National Remote Sensing Agency and ICAR has been formed for the purpose.

Jakhar has decided to put the ministry's aviation wing to work. To bring the programme into operation quickly, the ministry has asked the former feeder airline Vayudoot to return all the aircraft that had been loaned to it. Jakhar has also written to the UN Food and Agricultural Organization for assistance in procuring more planes, which it has reportedly acceded.