A biornaterial based on coral's structure to set broken bones 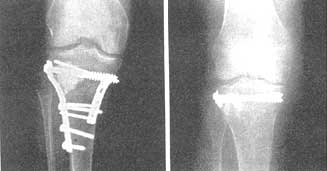 A MATERIAL developed by a group of materials scientists and surgeons may take away much of the pain in treating fractures. Led by Brent Constantz of the Norian Corp. in Cupertino, California, the team claims that Norian SRS (SRs stands for skeletal repair system) can be prepared as a paste which could be used to fill up the fracture site to heal it (Science, Vol 267, No 5205).

The paste sets in minutes and within 12 hours becomes as strong as natural bone. Also, bone cells grow into the implant, gradually replacing it with fresh, living bone and making the fracture whole again.

In clinical trials in Sweden and The Netherlands, Norian Mrs has been used to treat dozens of patients with fractures of the knee, shoulder, wrist and hip. Compared to conventional techniques which involve screws, pins and metal plates to support broken bones, the new method proved to be quicker, used less metal supports and the patients heated faster.

Surgeons in America have used this bone substitute in 65 pati( per cent of whom underwent the operation for cosmetic purposes. Constant7 got the cue for developing Norian SRS from corals. Bone formation in humans is controlled by proteins, which direct the bone's mineralisation, gradually producing a porous, crystalline structure. It is extremely d fficult to mimic the protein-directed bone formation to produce whole sections of bone quickly. But the coral skeleton, which has similar pores, is not proteindictated. Therefore, Constantz decided to mimic coral, building bones by Norian SRS significantly cuts down on the use of metal supports (right) as compared to conventional techniques to treat fractures reacting chemicals, and formed the Norian Corp. to realise the vision.

It turned out to be no easy task and it took Constantz and his colleagues several years to get the right mix of chemicals. The scientists developed 1,200 formulations before they got the present brew.

Surgeons believe the new material could be especially useful in treating damage to the end of long bones such as those of the arms and the legs. Says Toni Broekhuizen, Chief of the trauma surgery department at the Academic Medical Centre in Amsterdam, "If it (NOTian SRS) is what we think it is, it could be revolutionary."