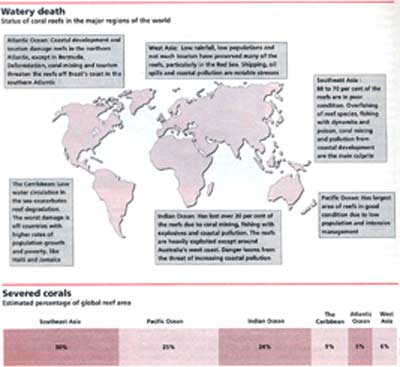 Coral reefs, one of the world's most biologically diverse ecosystems, are in a steady state of decline around the world. A study by the World Conservation Union and the United Nations Environment Programme in the mid-'80s found that people have damaged or destroyed significant amounts of reefs off the coasts of 93 countries. An analysis by the Australian Institute of Marine Science indicted the people as causing the death of 5 to 10 per cent of tl1e world's living reefs. If current rates of degradation continue, another 30 per cent could be lost in the next 20 years and an additional 30 per cent will suffer severe deterioration in the next 40 years.

It is only reefs in remote areas that are found to be relatively healthy. The causes of degradation vary, but coastal populations and heavy coastal development are factors shared by all. Reefs usually suffer from a mixture of declining water quality, direct destruction and depletion.