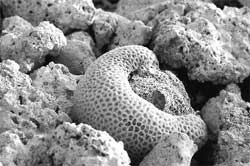 global emissions of greenhouse gases may pose serious threats to coral reefs the worldover, warn scientists. Increasing levels of carbon dioxide (co2) are reducing the ability of coral animals to make the limestone skeletons that build reefs. This warning has come in the wake of a report from Australia's Great Barrier Reef Marine Park Authority which has reported that bleaching is killing reefs along 1,000 kilometres of the Queensland coast.

"In the long term, the high levels of co2 may interfere with skeleton growth by reef builders and pose a serious threat to the sustainability of reefs world-wide," he says.