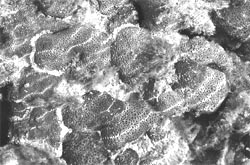 Coral reefs were last discovered in Maharashtra more than three decades ago and since then scientists had almost given up all hope of finding any live corals in the Indian Ocean. The general belief was that strong currents and sediment deposition would not let corals exist along the northern shores. However, all that has been proved wrong by the recent discovery of live corals. Scientists feel this has been possible because of reduction in the amount of mud being brought in by the rivers.

However, as pointed out by Hasmukh Shah, chairperson of the Gujarat Ecology Commission, the newly discovered colony of corals will have to be preserved, and the only way the state government can do that is by putting a check on industrial activities along the adjacent coast. Endorsing this view, ges chairperson Viren Patel pointed out that port-based development would pose danger to the newly growing corals in the area.