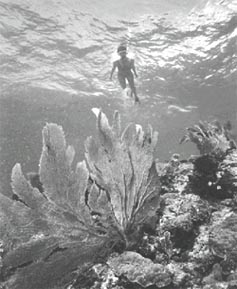 a canadian researcher has discovered answer to one of the most crucial environmental challenges facing the world: how to save coral reefs. Ellsworth LeDrew, a geography professor at the University of Waterloo in Ontario, has devised a mathematical formula that will automatically scan satellite images to uncover changes in coral reefs.

In recent years as much as 10 per cent of the world's coral reefs have been destroyed or badly damaged because of pollution, over-fishing and El Nio heat waves that kill the algae. According to estimates by the World Resources Institute, half the tropical coral reefs face serious threats. "Reefs are the lungs of the ocean. Their degradation can have a major impact on the global environment," LeDrew said.

A major hurdle faced by the researchers in their conservation efforts is the problem of keeping track of the harm done to reefs because most of these reefs are found in remote parts, which are visited mainly by the people responsible for their damage.

If data was to be collected by manually wading through piles of satellite images it would be prove to be a time-consuming job and the information derived will not be very reliable, LeDrew added. "There will be gigabytes of data coming down everyday from just one satellite. We needed to do this numerically so a computer could single out areas that ought to have a closer look," he said.

Therefore, the mathematical formulae proved to be a breakthrough. LeDrew came up with the idea of devising the formulae after a spill of arsenic-laden water in 1996 from a gold mine in Fiji. The pollution killed the native algae on the inshore reefs, a destruction which was noted by local researchers.

The satellite images of the same reefs had also been recorded the previous year by the orbiting French spot satellite. With these images in hand, LeDrew then got satellite images recorded of the destroyed reef in 1997. And after combining images of both the years LeDrew was able to evolve a algorithm, a type of mathematical equation that automatically processed the data.

LeDrew's calculations were based on the fact that living corals keep changing their colours, with variation in brown algae, purple algae and green algae. But the colour of the damaged coral remains homogenous.

The formulae will require a new satellite, which is now under study by the us National Aeronautics and Space Administration. It will have special sensors tuned to the light wavelengths that identify living coral.