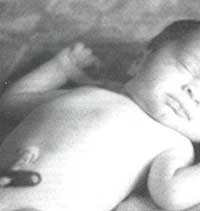 THE role of the umbilical cord as a foetus's lifeline does not end with birth. Researchers in the us and Europe now say that the cord blood can provide a new lease of life to siblings suffering from potentially fatal diseases like leukaemia and even AlDs and also from disorders such as diabetes and rheumatoid arthritis.

The umbilical cord, which is removed and discarded after delivery, contains a large number of stem cells - cells that can give rise to indefi- nitely more cells of the same type, and from which certain other kinds of cells arise by differentiation - bearing the co34 cell marker, which is normally found in bone marrow. Because of the stein cells, the cord blood can prove especially useful in treating blood disorders like icukaemia (Science, Vol 268, No 5212).

Other, advantages of cord blood include the possibility of indefinite storage, and transplanting it back to its original owner when required. It can also be donated to an unrelated recipient because it has reduced immunoreactivity, which lowers the chance of rejection by the recipient's immune systent or even of devastating side-effects like graft-versus-host disease (GVHD). Till date, 75 cord blood transplants have taken plaGe all over the world, and cord blood banks are springing up in medical centres across Europe and the us.

If cord stem cells can reconstitute bone marrow Cells, then they can also be used in gene therapy, conclude some optimistic scientists. Theoretically, if a gene is added to the cord blood cells before trans can plantation, then it should new be expressed in every blood cell. 'I think the to application of cord blood to the clinic is going to be much larger for gene their apy than for strict transplants or malignant disease," says haematologist David Harris of the University of Arizona, and Tucson.

But John Barrett, head of the bone marrow transplant unit at the National Heart, Lung and Blood Institute in Bethesda, Maryland, is not quite sure of the claims of reduced Gvin). He concedes that cord blood therapy is'a'good idea,' but adds that 'I'm a bit skeptical.

Cord blood cells contain more CD34 cells than adult blood because the foetus generates large quantities Of CD34s in its liver and bone marrow during its development. Cord blood cells have a "greater proliferative capacity" than the cells in the bone marrow, and this gives it an edge over bone marrow.

Says haematcdogist David Linch University College London, "Bone row is rather a waste, You could th most of it away, as all you are really is the primitive stem cells that have.1 the self-renewal capacity and the city to re-populate and produce ma blood cells." The exact mechanism for the decreased immune reactivity is not yet kown. one of the reasons could be that cord blood cells have a muted immune system and its T-cells, which attack specific antigens, are rather 'naive'. Says Eliane Gluckman from Hopital St Louis in Paris, where the first cord blood transplant was tried out, "It could be that the naive T-cells are more tolerant, or there may be a suppressive effect by the maternal cells still floating in the cord blood."
The first attempt at gene therapy through d blood was made by Donald Kohn of Children's Hospital in Los Angeles in spring of 1993. His aim was to intror a missing gene into 3 children suffer from adermsine deammase (ADA) defiicy, a potentially fatal defect which can cipple the immune system. CD34 cells were separated from each child's cord blood just after birth. Then Kohn's team used a retrovirus to carry the ADA gene into the CD34 cells, which were then reintroduced into the children when they were A 23-month follow up shows the criment to be partially successful so The gene is expressed in about 1 per t of the bone marrow population and vienger RNA (ribonucleic acid) for the yme is being produced, thus proving the gene is being expressed. With the c being expressed in only I per cent of stem cells, Kohn now wants to concentrate on optimising the number of cells with the gene.

Among the many proposed therapies, The most ambitious is the one proposed by Anthony Ho and Flossie Wong-Staal of The University of California, San Diego, who wish to me Kohn's technique to treat children with AIDS. Stem cells are not infected by HIV, so the researchers hope to extract CD34 cells from the cord blood of babies born to HIV-POSitiVe mothers and insert into those cells an anti-mv gene - for an enzyme that can cleave HIV RNA.

Once this gene is expressed, it would inhabit Me reproduction in the child's cells.Clinical trials are scheduled to start early next year.

Though a lot of scientific scrutiny is sired for exploring the full potential of cord blood, enough evidence has been established to make the doctors think twice before discarding the umbilical cords.