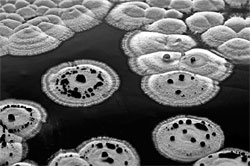 scientists have accomplished a feat that could one day lead to better treatments for cancer. They have sequenced the genome of the bacterium, Streptomyces coelicolor. This feat is expected to aid the development of several new antibiotics as the bacterium S coelicolor and its relatives are sources of nearly two-thirds of all the antibiotics manufactured across the world. They also generate compounds that are used to make cancer drugs.

The bacterium's genome, consisting of 8.50 million dna letters, was pieced together and sequenced by researchers from Norwich-based John Innes Centre and Cambridge-based Wellcome Trust Sanger Institute.

The life process of this bacterium is fascinating. It dwells in soil and is responsible for its 'earthy' smell. But more importantly, it also helps scientists harness vital antibiotics like tetracycline and erythromycin. As part of its survival process, it uses clusters of genes to create the medically useful molecules. It forms tissues, clumping first into leathery patches of inter-connecting cells that soak up the nutrients in the soil and later, when its food runs dry, it sprouts fuzzy branches that scatter hardy spores. At this spore stage, it produces antibiotics to fight off other bugs competing for the same resources. Streptomycin was the first antibiotic harnessed from the Streptomyces family, of which S coelicor is a member. The drug was marketed for the first time in 1944.

While sequencing the genome, scientists discovered around 20 gene clusters used by S coelicolor to produce the antibiotics. Most of these were previously unknown. The research team also found that S coelicolor has 7,825 genes among 8.7 million bases -- the largest number of genes so far discovered in a bacterium (see www.nature.com , May 18, 2002).

"The genome contains an unprecedented proportion of regulatory genes, predominantly those governing responses to external stimuli and stresses. There are also many duplicated gene sets that may represent 'tissue-specific' forms operating in different phases of the bacterium's colonial development. This is unique for a bacterium," say the researchers.
The discovery of the genome sequence could help engineer more potent drugs. "Manufacturing many new antibiotics is now possible. The decoding could reveal genetic information about compounds which have never been known before," says Craig Townsend, who studies biosynthesis at John Hopkins University in Baltimore, usa.

Using genetic engineering, pharmaceutical and biotech companies hope to splice together parts of the bacterium's cell machinery from different gene clusters to build new drugs. Experts say that this 'combinatorial biosynthesis' might create compounds that can overcome antibiotic resistance prevalent in many bacteria. The increasing resistance of bacteria to antibiotics and the growing number of untreatable superbugs requires ever-new antibiotics. "The sequence is a fabulous resource for making new antibiotics," claims Keith Chater, a member of the research team.

Also, knowing how S coelicor progresses through its life phases might help in understanding the growth and development of more complex organisms, opines biochemist Chris Walsh of Harvard Medical School in Boston, usa. "Maybe these steps are universal," he speculates. Streptomyces are an important bacterial family because they are cousins of bacteria that cause tuberculosis, leprosy and diphtheria. "Studying common features of the four could lead to insights into new ways to fight diseases," says David Hopwood, another research team member. At present, the research team plans to experiment with ways to combine S coelicor's genes with those from other bacteria.