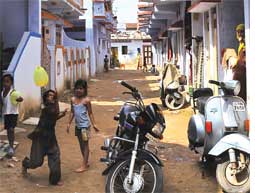 When her husband took chronically ill after communal riots drove them to Juhapura, a ghetto on the outskirts of Ahmedabad, poverty made life seem unmanageable. Free will then became a matter of Rs 8,000 for 40-year-old Zainab Bi. For a sum like that she was willing to swallow an unknown pill once in three months. It wasn't much they were asking for really, so she gladly gave her thumb impression on the dotted line.

For companies researching new drugs the thumb impression was proof that Bi submitted herself to the experiment of her own free will. It was far more expensive to have such proof in countries where the multinational drug companies that sponsored the research had their headquarters. They were far more cumbersome, involved lengthy documentation and rigorous insurance plans.

Clinical research organizations (cros) made the task far easier for these companies by carrying out their research in the ghettoes of India's big cities. Drug trial was far less daunting; and inexpensive. People were more than willing to offer their bodies for bio-chemical experimentation. The official guidelines warned against monetary inducement.

It took Bi, and so many like her in Juhapura, only moments to make up their mind when a woman agent from a newly opened cro, Lambda Therapeutic Research Ltd, approached them for participation. She explained they would be required to take newly developed drugs for diseases like malaria, chikungunya, hiv/aids even. The agent spoke of possible risks, side effects and what not. Not all of it made sense to Bi. What did sink in was that she was going to be paid Rs 8000 for some new medicine that could cure hiv/aids. She had heard of this disease in radio messages.

In the beginning, Juhapura's women were not sure how they would get their family's permission to spend a night, or may be two, at the clinical research lab on the national highway not far from their slum area. When they learnt they were going to be paid between Rs 4,000 and Rs 10,000 the deal was too sweet to resist. The family could not afford to object either.

The transition from the city centre, where they earlier lived, to Juhapura made economic refugees of most people living here. Before the riots many of the 5 lakh inhabitants of Ahmedabad's largest Muslim ghetto lived in thriving bustling areas like Naroda Patiya, Gulbarg Society, Vatwa. But Juhapura was a world apart, where the community was both the consumer and the vendor. The tailors, vegetable and meat sellers, small time hair-dressers and watch repairers that practised their trade sold services and products to one another. The vibrant market of the city centre was absent here.

Naturally therefore, if a tailor was making Rs 200 a day in Naroda Patiya, he could barely manage Rs 50 a day in Juhapura, said Noorjahan, community leader attached to a group ambitiously called Bharatiya Muslim Mahila Andolan, Indian Muslim women's movement. Once Bi's husband fell chronically ill, it was hand to mouth for the couple and their four children. Under the circumstances, nitpicking over side effects and other safety issues was a luxury. Rs 8000 was what mattered most.

Did they not worry at all? Jannat Bibi said she had heard they were tested for drugs for diabetes, asthma, cancer and even neurological disorders. Noorjahan said some women did complain of stomach problems and rashes on the body. Bi, who has been doing this for three years, said there was no reason for worry. "It is perfectly safe. I haven't had a single problem in all these years."


The problem Bi and her co-travellers in clinical trials faced was of a very different nature and not anticipated by any of the 300-odd women who made an occasional windfall by offering to participate in drug trials. In June this year an Ahmedabad Gujrati daily published an article on clinical drug trial and reported how multinationals made guinea pigs of the city's poor; the article carried photographs of the Juhapura women with their names. In the uproar that followed, the women became the subject of gossip and criticism for venturing in the night to experiment with unknown drugs. Embarrassed by the fingers pointed at them, 55-year-old Amiya Bano's son and daughter-in-law made her leave the house.

"These women are angry with me for bringing the newspaper reporter here. They are troubled because all eyes are on them now. But what can they do? Going for these trials is the main source of income for their families," said Noorjahan.


The drug trials were indeed a bit like Kafka's trial for these women. They were not very clear, like the protagonist in the novel, what they were being tried for. Nor were they sure who was behind the trial. "They make us stay overnight, take our blood samples and then we have to take the pill next morning. We are not supposed to seek remedies anywhere else but the company if some ailment crops up," said Bi.

So far nothing dramatic has taken place, said Noorjahan. But who can tell what manifestations will show up may be years later? And links between cause and any devastating side-effect will be lost in the hurly burly of India's ghettoes, where clinical trials are gaining popularity as a livelihood option.

India offered just the perfect setting and plenty of business sense for conducting clinical trials. The subjects and patients who could be recruited at low cost made India a favourite destination for global pharma companies like Pfizer, GlaxoSmithkline, BristolMyers, and others. Add a technically competent workforce and a friendly drug control system and the clinical trial business was set to touch us $1 billion by 2010, up from us $200 million in 2007, estimated India's Associated Chambers of Commerce and Industry.

The drug regime would become even friendlier when regulations proposed by the Drugs Controller General of India were formalized; this was likely to be soon. The proposed regulations recommended phase i trials that tested safety and tolerability of a dosage of drugs developed outside India be allowed if the manufacturing company collaborated with an Indian one. At present India allowed phase i trials only for drugs formulated in India and drugs to treat hiv or cancer. However, phase ii and iii trials for drugs formulated abroad were allowed in the country as they had already been tested safe. Phase ii trials checked the efficacy and side effects of a drug while phase iii trials confirmed its benefits and side effects on a wider sample.

"Phase i and ii are the most dangerous stages of clinical trials in human beings. Opening the doors to these trials will only increase exploitation of the poor. Why should we allow phase i trials of medicines which may not even be used in India and even if they are, it will only be the richer sections that will benefit," said a public health activist.

"If these trials were for diseases that affected the masses, like tuberculosis and kala azaar (leishmaniasis), then we could support them as the result was going back to them and not feed corporate interest," said Mira Shiva, chairperson of the ngo Health Action International, Asia Pacific.

An official of the cro, Lambda, was upbeat about the proposed regulations "This will only benefit the community. Even if the mncs do not share their intellectual property now, they will eventually have to come to India to market the drugs."

The pharma giants collaborated with an Indian research agency for clinical trials that did the job for them at dirt-cheap rates, said a senior sales manager of a leading Ahmedabad based pharma company. In 2005, the government also passed the Patents (Amendment) Act, which assured protection of patents held by foreign companies, thus encouraging them to conduct trials in India.

If and when something did go wrong, there was no punitive mechanism. "It is a long chain where work has been sourced down from the company to a clinical research organization to a hospital and finally to doctors. If a problem occurs, all of them will pass the blame to the other. There have been cases of suppression of mistakes in the past," said Shiva.

Remunerations for clinical trials were also an issue. Volunteers were not supposed to be lured with payments. "Participants may be paid for the inconvenience and time spent... However, payments should not be so large...as to make prospective participants consent readily to enroll in research against their better judgment, " said Indian Council for Medical Research guidelines on clinical trials. Clearly, the guidelines had no bearing on the brisk business of clinical trials in distant Juhapura.

The guidelines also stated a government-registered institutional ethics committee, comprising doctors, activists, lawyers and pharmacologists, would ensure there were no monetary inducements. With a gush in the number of clinical trials, several private ethics committees sprang up overnight. The cros needed an approval from an ethics committee before they could initiate a drug trial. It was simple. These committees approved of trials for a fee. cros were only too happy to pay.