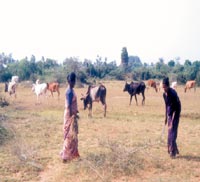 In the face of mounting protests against the Comprehensive Wasteland Development Project (cwdp), the characteristically intractable chief minister (cm) of Tamil Nadu (tn), J Jayalalithaa, has been forced to climb down partially. The state government's ambitious programme has been in the eye of a storm ever since it was conceived two years ago. Panchayats, political parties and civil society groups are bitterly opposed to the cwdp because in its current form it favours corporate houses and big landowners, at the same time being loaded against local communities (see box: Points of discord). The discontent is so widespread that despite the cm's rethink, the project may well go to seed.

Jayalalithaa unveiled the cwdp during a meeting of the Confederation of Indian Industry (cii) in July 2002 (see box: The sell-out). The project seeks to regenerate two million hectares (ha) of wasteland -- including a swathe of 0.1 million ha of community land -- by leasing it out to corporate bodies. The companies would use the tract for agro-industrial purposes.

On January 28, 2003 the cm declared in the state assembly that she was willing to lease out wasteland also to self-help groups of farmers. This concession came after several months of intransigence wherein she wanted only the industry and cooperatives to execute the project. Even now the cm hasn't conceded the demand for handing over these tracts to landless people. Her contention: such people would not be able to plough huge sums of money into the scheme -- supposedly an essential input for making wasteland cultivable.

From the outset, village bodies have been up in arms about the cwdp. More than 193 panchayats have passed resolutions against the transfer of the tracts to corporate houses. In October 2002, the panchayats demanded that the state government hand over the land to them. Two political outfits -- Dalit Panthers of India and Pattali Makkal Katchi -- that represent the economically weaker sections want the landless to be allowed to cultivate wasteland.

The campaign against the cwdp got a further boost when P V Bakthavatchalam of Organisation for Civil and Democratic Rights, a public interest body based in Chennai, filed a petition in the Madras High Court (hc) pleading that the project be scrapped. He held the view that the wasteland programme would have a "devastating effect" on the livelihood of landless labourers, small and marginal farmers, and shepherd communities.
The cwdp adopts separate mechanisms as well as terms and conditions for three categories of land: private wasteland, community common land and privately owned saline land. To coordinate the programme, a separate body called the Tamil Nadu Watershed Development Agency (tawdev) has been registered under the Societies Registration Act.

Till now, the programme has not attracted any investment from outside. But since the cwdp is said to be the brainchild of the cm, the state government has sanctioned an amount of Rs 15 crore from its side to lay the groundwork in 10 districts. Another 100,000 ha of wasteland are proposed to be acquired during 2002-2003 for which an additional allocation of Rs 40 crore has been made. While the authorities have estimated that the cost of developing private wasteland alone would work out to Rs 1485 crore, they have not made any financial provision for developing community and saline wastelands.

private transfer: On the 1.8 million ha of private wasteland, which mostly belongs to farmers but is not under cultivation, corporate houses and cooperatives will take up agro-forestry programmes along with the landowners. These tracts will primarily be used for planting fruit trees. About 55,000 ha of land in 10 districts, spread over 28 blocks, has been identified for the pilot project.

A sum of Rs 5, 500 per ha will be disbursed to each farmer over a period of two years as subsidy towards pitting, planting, fertiliser application, maintenance and watering. The farmer's contribution, denoting labour participation, would be Rs 3000. The scheme involves treating plots of 2500 ha on a watershed basis. A sum of Rs 1 crore has been made available to the state forest department for preparing 54 lakh saplings of agro-forestry. The horticulture department has got Rs 1.5 crore for raising 12.63 lakh seedlings.

community takeover: To develop one lakh ha of community wastelands, corporate houses would cultivate orchards with drip and sprinkler irrigation. These tracts are essentially common property resources under the revenue department. They will be leased to the corporate sector and cooperatives for a maximum of 30 years. The government reserves the right to cancel the lease and has specified a time-frame of 3-5 years for carrying out the development.

Strangely, the nitty-gritty of benefit sharing has not been listed out properly for community land. The programme mentions details of the government's portion of financial returns, but is silent on the community members' share.

saline shift: In the case of 0.5 lakh ha of saline lands (these are privately owned) too, the government is yet to open up and divulge details. All that is known is that the normative ceiling would be about 405 ha per applicant in terms of quantum of land.


The most controversial component of the cwdp pertains to leasing out of common wasteland from which villages still derive benefits. The stark contrast between the clauses that deal with private tracts and community land has queered the pitch further. Even as the tn government has been generous while dealing with the former, it has given unbridled control of the latter to corporate houses.

Records show that community wasteland continues to be used for grazing purposes, cultivating rain-fed crops and taking up palm and tamarind plantation. In fact, it generates substantial revenue for community members. A deliberate attempt seems to be underway by the state authorities to grab these tracts and club them with wastelands. Rural Development Society, a Chengalpet-based non-governmental organisation (ngo), prepared a list of wasteland classified in Kancheepuram district. It was found that all plots bigger than 40.5 ha were used as pastures. Even in the 9-40.5 ha size, nearly 80 per cent were utilised for the same purpose.

Thomas Fatimson, convenor of The Campaign for Right to Livelihood and Food Security, Chennai, points out that under the 73rd and 74th constitution amendments, panchayats have the right and access to common property resources. "Leasing out wasteland to corporates will override the Land Ceiling Act and Land Reforms Act," he avers. The fear is that once the land is handed over it will be fenced thus restricting grazing activities on it.

Bakthavatchalam apprehends that corporate houses would take up water-intensive plantation, which would further deplete groundwater and lead to mono-cropping. "This would impact the traditional economy of community members," he feels. D S S Mani, convenor of ngo Human Rights Tamil Nadu Initiative, opines: "The move will favour the land mafia close to the powers that be. In the process, encroachments on government land will be legalised." This, it is believed, is the underlying reason for the state government to offer several incentives in the case of private land.

The creation of tawdev to supervise the programme has also been criticised by experts since many departments, funded both by the Union and state governments, already exist for monitoring wasteland development schemes. At present, three major programmes with an annual outlay of close to Rs 200 crore are being implemented.

Questions are being raised about the financial viability of the cwdp with regard to the money required for developing private wasteland. In spite of the absence of external funding, the government appears overzealous in its effort to sustain the project for two years.

While the director of tawdev refused to comment on the programme, Down To Earth's numerous attempts to contact other officials came a cropper. When a copy of the government order on the project was sought from tawdev manager C Vidyasagar, he turned down the request saying it was an internal matter. The lack of transparency in implementing the scheme lends weight to the theory that there's more to the cwdp than meets the eye.