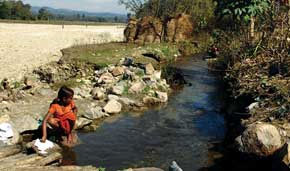 Close to the Pandai river that runs along the India-Nepal border lies Bikhnathori. The near-dry river bed is full of pebbles. At some distance shine the Himalayan peaks. This seemingly calm village calls itself orphan. Nepali people across the river call its residents water smugglers.

The village in West Champaran district of Bihar does not have electricity and water supply. It did not complain of darkness, but when forest officials in Nepal barricaded its only source of water, a stream across the Pandai, they raised their voice for the first time.

On January 22, they marched to the Nepali side and tried to break the barricade.

They did not get water but furious Seema Suraksha Bal (ssb) soldiers abused them and warned them against protesting again, they alleged. “The jawans wanted us to plead with the Nepali villagers for a compromise,” said Dayanand Sahini, a resident. ssb does not admit it, but people say its jawans also drink the water from Raidhara stream, which is officially in Nepal.

Every morning, say villagers, two tankers leave the ssb camp on the edge of Bikhnathori to fill water from the stream. On February 14, this Down To Earth correspondent saw two ssb tanks crossing the river bed and filling water from Raidhara.

The Nepali forest department told the residents of Bikhnathori that barricades were erected because it is constructing a park. It is Nepal’s water and is not meant for frequent exploitation of Indians, they asserted.

For six days, 5,000 residents of Bikhnathori boiled the Pandai water to quench their thirst. Pandai is but a trickle used for washing motorcycles and washing clothes. Nepali people defecate on its bank. “The river is shallow. Filth in it is not washed away quickly. One is sure to get diarrhoea on drinking its water,” Sahini said.

People from across the border have now allowed Bikhnathori to fetch water but only until March 1. “We do not know how we will survive after March 1. The government has not done anything to resolve the dispute,” Sahini said. There is no hand pump or well in the village. “We have no option but to plead for water,” villagers said.

For decades villagers have been fetching water from the Nepal side. This is the first time the Nepali people have called them water smugglers. What’s stranger is the Indian authorities’ reluctance to solve the problem. Tirhut range commissioner S M Raju visited the village on January 31 and offered little more than the promise of solving the problem.

Villagers are suspicious. Sahini said since 2002 the government has stopped collecting land revenue from the Bikhnathori residents. The commissioner said that’s because the village’s land records are missing. About five years ago the district administration was secretly scrutinizing the records, he added. “This means we have no land,” said Sahini. “How come the government has issued us voter identity cards?” he asked, showing a card.

Adding to the confusion, the Indian forest department claims Bikhnathori comes under protected forest area. It has not taken any steps to get the land, though. People say neither the district administration nor the forest department has issued them any letter declaring the village protected land.

People fear the government does not want to acknowledge the village’s existence and that is why it has stopped collecting land revenue; over the years this would officially erase its identity. There are also rumours of a plan to have ssb camps where the village is. 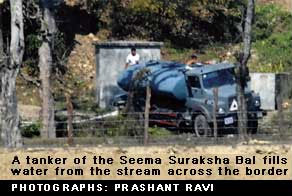 In 2005, the villagers filed a petition in the Patna High Court, requesting they be given revenue receipts and protection in case of eviction. “Till 2002 land was ours, then it suddenly became forest land and now there is the fear of losing citizenship,” villagers said.

The village has a school, a post office and a railway station. “Do animals go to school, or do they write letters to their relatives?” asked its resident Sheshnath Yadav. “Our village is an orphan. We have no nationality.” He then got sarcastic, adding, “I think we are in China, and we are known as water smugglers.”

To pacify the people, the commissioner asserted Bikhnathori is an integral part of India. “We accept the water problem is grave. The only solution is to have a symbiotic relationship with Nepal,” he said.

Escalating tension, failed measures
Sharing the water of the Pandai, which originates in Nepal, is also becoming contentious. Nepali villages often divert the thin stream to their fields. Idris Khan, 55, cultivates wheat in Bikhnathori. Two months ago Nepali people blocked the water of the Pandai, destroying a quarter of his crop. “They blame us for drawing excessive water. In a fit of rage I hurled expletives at them,” he said.

Bikhnathori residents, on their part, keep a watch on the flow in the river. When the flow is high they cut the stream at night and divert water to their fields. A tiff in the morning is inevitable, but by then the crops are watered.

On January 28 this year, sub-divisional officer Nirmal Kumar proposed building water tanks, one close to the stream and one on the Indian side of the river, to supply water to Bikhnathori. As per the plan a pipe was to bring water from the stream to the first tank and another pipe running across the river bed was to connect the two tanks.

When villagers approached the Nepali forest department for permission to construct the tanks, Surya Lamba, president of the Chitwan forest range refused. He said building any structure would require a high-level dialogue between Nepal and India. “We were told tanks cannot be constructed officially. We were given the permission to build them unofficially,” Yadav said. Suspicious of the intention of their neighbours across the border, the Bikhnathori residents did not build the tanks.

In 1999, the Bihar government had tried to sink a tube well in the village. Engineers told the people water is 50 m to 70 m below the ground. “We served tea and food to the workers,” villagers said. Seventy-year-old Bhagirathi Devi recalled bringing sweets for the workers.