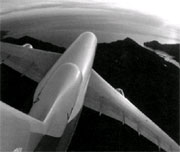 after birds, it is cosmic rays that are likely to put aircraft in trouble. Scientists at the Swedish Aerospace Company, Ericsson Saab Avionics (esa), say that cosmic rays could damage aircraft that mainly depend on computers as they are susceptible to the high-energy particles that bombard the earth. Computers induce stray currents in microchips and this, along with the current trend towards aircraft electronics with smaller and smaller components that use less current, has increased the chances of disaster.

Researchers at esa in Linkoping, are investigating the effect that high-energy cosmic rays could have on electronic components that contain static random access memory (sram). In a desktop computer, sram holds data accessed by the central processor. Scientists have discovered that cosmic rays consist of enough energy, which enables them to change the small charges used to represent 1s and 0s in the binary code in sram . Rays with an energy of more than five megaelectronvolts can change a 0 into a 1 or vice versa.

The effects of cosmic rays on electronic components were first observed last year during the Euromir mission, when two ibm laptops were tested for use in space. The computers were run for more than 550 hours. On an average, cosmic rays caused memory errors once every nine hours. Software has now been developed to watch for the memory losses. The problem was confirmed when esa tested a device containing 96.4-megabytes sram s aboard a Scandinavian Airlines long-haul jet. The device, which simulated an aircraft control system, flew on the plane for five months. During that period it built up more than 1,000 flight hours at altitudes above 10 km. It was found that a piece of information on the device was changed by a cosmic ray every couple of hours. As avionics systems are so tightly connected, a single error could produce lots of problems. At present Boeing, on its 777, and Saab aircraft use software to check the errors produced by cosmic rays.