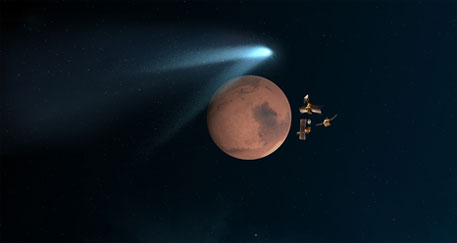 As Mangalyaan successfully completes one month in space, a recently-released study brings forth one of the greatest challenges in the world's race to send a manned missions to Mars and elsewhere in deep space.

Cosmic rays have created radiation hazards in space that threaten deep-space astronaut missions in the future, say researchers of a new study published in journal Space Weather. "The behaviour of the Sun has recently changed and is now in a state not observed for almost 100 years," says associate professor Nathan Schwadron of the US' University of New Hampshire Institute for the Study of Earth, Oceans, and Space, according to a report published by news agency PTI.

The researchers have found that due to a highly abnormal and extended lack of solar activity, solar wind (a string of ironised particles that escape from the solar atmosphere) is exhibiting extremely low densities and magnetic field strengths, which causes dangerous levels of hazardous radiation to pervade the environment of space. "...throughout most of the space age, the sun’s activity has shown a clockwork 11-year cycle, with approximately six- to eight-year lulls in activity (solar minimum) followed by two- to three-year periods when the sun is more active. However, starting in about 2006, we observed the longest solar minimum and weakest solar activity observed in the space age,” say the authors of the study.

Due to high radiation levels seen during the solar minimum periods, the allowable days in space for astronauts are dropping and estimated to be 20 per cent lower in the coming solar minimum cycle as compared to the last minimum cycle.

"While these conditions are not necessarily a showstopper for long-duration missions to the moon, an asteroid, or even Mars, galactic cosmic ray radiation in particular remains a significant and worsening factor that limits mission durations," adds lead author Schwadron.

The results of the research have helped in establishing the importance of taking radiation into account while planning long space missions to other planets.