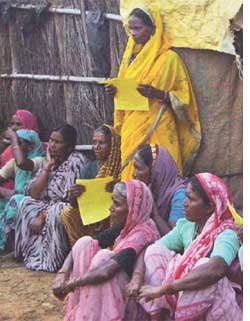 a decision to close the gates of Gosikhurd dam on the Wainganaga river in Maharashtra's eastern Vidarbha region triggered protests in villages that will get immediately submerged by the dam reservoir. The Vidarbha Irrigation Development Corporation (vidc) announced the gates would be closed on August 15 to fill the reservoir. People in the 14 villages in Bhandara and Nagpur districts that fall in the submergence area threatened to intensify their ongoing stir if the gates are closed before relocation is completed to their satisfaction. They have formed the Gosikhurd Prakalpagrast Sangharsha Samiti (gpss).

The villagers, mostly farmers, have been allotted alternative residential plots. But shifting is not an option they said; they have not been given land to grow crops.The plots allotted under the rehabilitation scheme are located two to 15 km south of the river along the main road connecting Pauni in Bhandara with Umred in Nagpur. The plots are mostly empty but for electricity poles and crisscrossing wires.

Five families of village Gohali, Nagpur, who tried to shift to the rehabilitation site have returned. "We came back in a month as we could not find work and ran out of money," said Shakuntala Bawane, a landless labourer. The compensation amount the villagers got was at the rate of Rs 26,000 to Rs 45,000 per acre (0.4 ha) between 1999 and 2004. It was too little. "How can they expect us to shift on the basis of a pittance paid 10 years ago?" asked Vanchala Meshram of Jamgaon village, Bhandara.


Villagers alleged the administration is acting under pressure from politicians. The August 15 deadline comes just ahead of the announcement of legislative assembly elections and the politicians want water supply to begin at the earliest so that they can take credit for it. Superintending engineer of Gosikhurd circle, Sanjay Kholapurkar, said work on the dam and a canal are complete and water supply can begin. But the vidc website shows none of the civil works is complete. 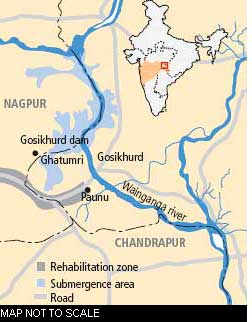 "What is the point in storing water if the canals are not ready for supplying the water from the reservoir?" said Vilas Bhongade, convenor of gpss. He said the only reason for hurry is that political bigwigs including former union minister Vilas Muttemwar and civil aviation minister Praful Patel are desperate to show results. Rajendra Mulak, mla from Umred where 51 villages will be submerged, agreed "For the last five years, 12 mla s from areas that will receive water from Gosikhurd are putting pressure to close the gates." Muttemwar, instrumental in getting Gosikhurd declared a national project last year, contended the closure of the gates is necessary to increase the groundwater level in the area. "If we listen to the villagers, the project will never get completed," he said.


A visit to the dam site revealed that 28 of the 33 gates are closed though August 15 is the deadline. Standing crops on over 100 ha were under water in village Gadeghat. gpss members said seven villages may be inundated in two weeks.

Villagers now say police force may be used to evict them. It happened in 2008 when villagers of Mendha, the only village to be shifted so far, were evicted. The administration said money would be given to help people relocate. Muttemwar said the revised cost of the project includes compensation but did not disclose the package details.

"We suspect they will offer us a small amount just when the villages are getting submerged," said Bhongade.