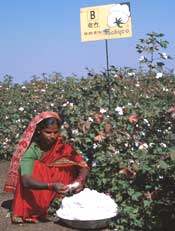 Two things happened on March 26, 2002, when the Genetic Engineering Approval Committee (geac) cleared the commercial cultivation of Bt cotton. Firstly, the event ushered in the era of gm (genetically modified) crops in India. Secondly, it sparked off a nationwide debate.

Cotton seeds are modified genetically to contain a common bacterium, Bt (Bacillus thuringiensis), that is potent enough to resist one of the most dreaded pests of cotton: the bollworm (see Down To Earth, Vol 10, No 14, December 15, 2001). According to Union government estimates, gm cotton seeds are expected to yield Rs 10,000 per hectare (ha) more than traditional varieties. The fact that India is the largest grower of cotton underscores the relevance of this amount. Consequently, the mood is upbeat in geac -- the Union ministry of environment and forests' 21-member panel. Its chairperson, A M Gokhale, is already busy planning for the future. Divulging information about other crops in the pipeline, he says: "Mustard is next on the list, then tomato."

The transgenic cotton seeds will be supplied by Maharashtra Hybrid Seeds Company Limited (Mahyco) -- a Mumbai-based seed partner of us multinational firm Monsanto, which pioneered Bt cotton in the late 1980s. Three of the four hybrid varieties Mahyco had applied for have been approved. These include Mech 12, Mech 162 and Mech 184, all suited for central and south India. Clearance for the fourth type (Mech 915) has been deferred because its tests were delayed. This is said to be ideal for the northern parts of the country.

What has caused environmentalists to raise an eyebrow is the government's sudden volte-face on the entire issue. Merely a year after authorities held back permission for the release of gm cotton on the ground that more research was needed to assess its efficacy, they have given it the go-ahead. Also being questioned is the geac's decision to keep under wraps the results of the field tests conducted on Bt cotton. V L Chopra, former chief of the Indian Council of Agricultural Research (icar) says, "Details of the Bt cotton trials have not been made available even to the scientific community, so how can one comment on it?"

Devinder Sharma, a New Delhi-based food and trade policy analyst, says, "The people should be informed about the benefits and risks of Bt cotton. They should then decide for themselves whether it is good or bad. Why is geac deciding the farmers' future?" P M Bhargava, former director, Centre for Cellular and Molecular Biology, Hyderabad, concurs: " geac should have made all the trial data public and let competent bodies assess it."

Suman Sahai of Gene Campaign has a probing poser: "Far from trying to solve the problems of cotton farmers, the geac has served the interests of Monsanto. Who is railroading India's gm policy in favour of corporates?" Vandana Shiva, Research Foundation for Science, Technology and Ecology (rfste), New Delhi, points out that though a Supreme Court case challenging the 1998 field trials has yet to be decided, Bt seeds have been allowed.

The authorities are dismissive about such charges. To be sure, the geac seems to have taken precautionary measures. For one, it has limited the approval period to three years after which it will review the situation. Other safeguards are also said to have been put in place:

• Mahyco has to ensure that a 'refuge belt' of one-fifth of every field is set up where planting of non-Bt varieties will be mandatory. On one-acre (0.405 ha) tracts, at least five rows of non-Bt cotton will have to be grown around the gm variety. This would act as a pollen trap

• The firm will have to educate farmers about Bt cotton

• Traditional hybrid seeds will be deposited in seed banks

• Seed packets must be labelled and should contain detailed instructions

These provisions notwithstanding, activists are apprehensive on two fronts: genetic contamination and Bt cotton's effects on human health.


Scientists see cross-pollination, leading to genetic contamination, as a potent threat posed by gm crops. Little research has gone into how pollen movement can transfer the Bt gene to wild populations. The gm advantage may also allow some plant varieties to displace others, altering the local biodiversity. This could be hazardous for centres of crop diversity (see box: Alarm sounded? ).

"The trials are clearly insufficient to assess long-term impacts. Crops are season-dependent. It is inaccurate to say that tests have been conducted for three years when actually only three experiments were carried out," points out Sahai. Bhargava, too, is not convinced: "The risks have never been assessed adequately for any gm crop." On the other hand, Ranjana Smetacek, director, government and public affairs, Monsanto Holdings Limited, Mumbai, says: "The risk from pollen flow is negligible, so isolation of Bt cotton is not required." P K Ghosh, advisor, department of biotechnology, is more circumspect: "Genetic contamination is not possible if you put a sufficient refuge area." But A K Bhatnagar, department of botany, Delhi University, counters, "We cannot stop pollen. Bt cotton can only be justified by its benefits of pest resistance."

While development of resistance in pests is a major cause for worry, Jagdish Nazareth of the Institute for Studies and Transformation, Ahmedabad, highlights another drawback: "Such transgenic genes impose a biosynthetic load on the plant, which renders the soil nutrient-deficient."


The impact of gm foods on human health remains a grey area. India's case is unique in that unlike other parts of the world, cotton seed cake is used as cattle feed in the country. "Through cattle the new gene will contaminate milk and affect humans," fears Sharma. But according to Ghosh, "The effect of Bt cotton seed on feed intake, milk production as well as composition of milk in cattle has been studied. Since Bt protein gets degraded in the acidic medium of the gut, there are no traces of it in milk," adds Ghosh.

Smetacek also seeks to allay apprehensions: "Bt cotton is not toxic to mammals including ruminants, birds, fish, and beneficial and non-target insects. In fact, it is substantially equivalent to non-Bt cotton as shown by composition analysis." Bhatnagar is cautious: "No immediate impact is discernible, but its long-term effect is not known as yet." Paul Harris of Faculty of Sciences, Adelaide University, Australia, exudes pessimism. "We may already have done huge environmental damage and we do not know enough about the effects of our modifications."

The other concern about the Bt cotton plant is regarding its pollen acting as allergens. While Smetacek clarifies that "there is no difference in the allergenic properties of Bt cotton and its non-transgenic version", Ghosh says, "Studies show that Bt cotton causes no allergy." He concedes that these tests have not been conducted in India owing to "lack of proper facilities". But A B Singh of the aerobiology and allergy laboratory, Centre for Biochemical Technology, New Delhi, claims, "Facilities are available in India but they have not been utilised."


"Farmers are clamouring for gm seeds. I don't think any country can avoid them for long," Union agriculture minister Ajit Singh reportedly said in an interview prior to the introduction of Bt cotton in India. While the gm movement may be picking up steam globally, its relevance needs to be assessed in terms of domestic ground realities.

In the us, up to 90 per cent of cotton is genetically modified. China cultivates Bt cotton on more than 400,000 ha of land. Other countries such as Argentina and South Africa have also switched over to the gm mode. But even their success stories have been tempered by notes of caution sounded by experts.

Take, for instance, the warning of scientists from the Institute of Plant Protection and the National Agro-Technical Extension and Service Centre of China. They say, "The potential of bollworm resistance to Bt toxins is most threatening to the sustainable application of transgenic Bt cotton." The sub-panel (on Bt plant-pesticides and resistance management) of the us Environmental Protection Agency also points out that the risk of pests developing resistant strains "is real" and "strongly agrees with the need for resistance management programmes" for "transgenic plants". Meanwhile, Australia has already started fortifying the plant's defensive mechanism by inserting two Bt genes instead of one.

" The Bt Cotton technology may work with reasonable success in many countries but not in India. Its irrelevance to the country's small farmers is the crux of the issue," avers Sahai. In this context, nagging doubts remain:

• Is there a system in place to control farmers and, more significantly, the seed supplier? Will Mahyco be allowed to monitor itself? This issue needs to be addressed immediately, what with no stringent clause in the Biosafety Protocol specifying how the company that introduces the seeds will be held liable in the event of long-term damage to either ecosystems or health.

• Should Mahyco have been entrusted with the responsibility of raising awareness among farmers, considering that this could lead to the dissemination of doctored information?

• Most importantly, is Bt cotton a permanent solution? "It will control bollworm infestation. But pesticides will still be required for other insects," avers Bhatnagar. Ghosh feels that the cost of production will fall, leading to a rise in incomes. But Sharma thinks otherwise: "Farmers are already caught in a pesticide trap. They will now fall into the biotech trap. Crop failure and the resultant suicides will continue." Experts fear that though farmers will have to spend less on pesticides, expensive Bt seeds will more than compensate for this.

S K Mahajan, head of molecular biology and agriculture division, Bhabha Atomic Research Centre, Mumbai, presents an overview of the situation. "It (opting for Bt cotton) is a reasonable compromise. On the other hand, there are those with legitimate concerns about the environment, small farmers and future generations. But the need of the hour is constant monitoring. If necessary, the provision for adding conditions or even withdrawing approval can be taken recourse to."

It may take a while for the issue to get resolved. But some experts are citing the ddt (dichlorodiflorotrichloro ethane) case as a precedent: when it was discovered that ddt is a highly potent weapon to fight insects, Paul Hermann Muller -- the person behind it -- got the Nobel Prize. Today ddt is banned. Food for thought?

With inputs from Prabhanjan Verma, Tessy Koshy and Suverchala Kashyap