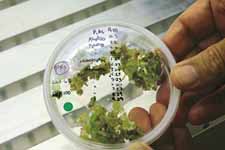 a new study claims to turn toxic cottonseeds into nutritious dinners for millions of undernourished people across the world. Keerti Rathore, a scientist at the Texas Agricultural Experiment Station, has tinkered with the genes in cottonseeds to stop the release of gossypol, its naturally-occurring toxin.

If cottonseeds become edible, it is estimated that the protein needs (cotton seeds contain 22 per cent high-quality protein) of over 500 million people will be met. And it will make cotton a multi-utility crop--use the cotton for textiles and the seed as food. Rathore's work was published in the Proceedings of the National Academy of Sciences (online, November 16, 2006).
In the 1950s, a group developed 'glandless cotton' without gossypol. But these varieties were weak in terms of pest-resistance.Gossypol protects the plant's stems, leaves and seeds by inhibiting breeding and multiplication of pests.

After the discovery of a glandless mutant, several breeding programmes were launched in the us, Africa, and Asia, to transfer the glandless trait into commercial varieties to produce gossypol-free cottonseed. These programmes provided cottonseed that could be fed to monogastric animals that use feed more efficiently and was even deemed safe for human consumption. However, these varieties were a commercial failure. Besides, these were susceptible to pest-attacks and farmers rejected the variety.

"What we did was a little different. We used a technique called rna interface, or rna, to suppress one of the key genes that was responsible for the production of gossypol only in the seeds. This meant that the natural supply of gossypol to the rest of the plant remained intact but at the same time, the seeds became a no-entry zone. Thus the plant had its armoury to fight pests while the seeds remained non-toxic," Rathore said. Gossypol is also known to be a strong male contraceptive--it deactivates sperms. By making the seeds gossypol-free, the scientists have taken care of any adverse side-effects.

The novelty of the team's research was that they targeted the seeds' gossypol content. This toxin is found in cottonseeds almost on its own without any association with any other kind of toxin. However, in the rest of the plant, gossypol shows up hand-in-hand with similar plant toxins like heliocides h1, h2, h3 and h4. Rathore and his colleagues used this information to overcome the shortcomings of the glandless cotton variety developed earlier. They then used molecular tools to find out the exclusive gossypol content and suppress it.
Rathore cautions that the research is still at the stage of greenhouse trials. Field studies will be conducted over the next five to six years. However, in experimental greenhouse farms, the no-gossypol variety has stood its ground.

Gossypol values in the seeds from some of the cottonseed lines produced by the group are well below the limit deemed safe for human consumption by who and the Food and Agriculture Organization. However, the introduction of transgenic cottonseed may be delayed in India as the country's top gm regulator, the Genetic Engineering Approval Committee, is yet to approve any gm crop for human consumption.

Some scientists are hailing the work as the killer application of gm technology that could silence the anti-gm lobby, says Ganesan Sunilkumar, a plant geneticist from Tamil Nadu. "This means we can also look at a number of other potential food sources like Lathyrus sativus, the common legume known as the 'famine crop' across Asia and Africa. The poor eat these legumes and suffer from spastic paraperesis. Similarly, cassava and fava beans can be stripped of toxins like cyanogenic and fava glycosides to make them edible," he says. But the world's biggest anti-gm lobby is treading with caution on the new find. "We still have to see if suppressing one gene activity triggers of any other side activities in cottonseeds. That can be achieved only with large-scale field trials," says Sue Mayer, director of Genewatch uk.