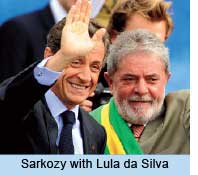 brazil has become the first major developing nation to announce voluntary greenhouse gas reduction targets ahead of the Copenhagen climate talks. President Lula da Silva said his country would reduce emissions by 36-39 per cent below the business-as-usual levels by 2020. Half the cuts would be achieved by slowing deforestation. At a press meet with French president Nicolas Sarkozy, he expressed hope that Brazils move would prompt other countries to commit to higher emission targets at Copenhagen. The leaders endorsed a proposal that requires rich nations to cut 80 per cent emissions by 2050. The proposal has put the duo at odds with Denmark, Australia and the US which are lobbying for voluntary emission reduction targets.

african leaders at a recent meeting agreed on how much cash to demand from the rich world to compensate for the impact of climate change on the continent, but are keeping the figure secret until the Copenhagen talks.

Ethiopian prime minister Meles Zenawi, who will represent 52 African nations at Copenhagen, threatened to walk out of the negotiations if their demands are not heard. Earlier, African countries had led a boycott of negotiations for two days at the Barcelona climate talks in November.

Obamaspeak
Urges others to act during Asia visit

during his Asia visit, US president Barack Obama stopped at the Asia Pacific Economic Cooperation and urged world leaders to reach a political consensus at Copenhagen saying a legally-binding agreement on emission reduction targets is too difficult.

Let not the perfect be the enemy of the good, he said. Along with Danish prime minister Lars Lokke Rasmussen, he pitched for a plan to reach a political agreement.

Obamas call to action comes amidst doubts that the US Senate would pass a climate change bill before the year ends. US energy secretary Steven Chu, during his recent visit to India, had said unless the Senate clears the bill usa would be unable to commit to specific targets at Copenhagen.

australias ruling Labor Party has agreed to a key demand by the opposition that agriculture be excluded from the national emissions reduction bill. This raises hopes that the bill will pass through parliament before the Copenhagen talks. The legislation is important for prime minister Kevin Rudd to show that his country, known to be among the top polluters, is acting to reduce greenhouse gas emission. He will be in a active role at Copenhagen as friend of the chair helping Danish prime minister seal the climate deal.

maldives president Mohamed Nasheed hosted a final pre-Copenhagen summit to urge world leaders to take concrete action at the climate talks. At the meeting with leaders from Africa and low-lying nations he said anything less would be a recipe for collective suicide.

at a public hearing in Delhi, hundreds of people from across the country testified that climate change will bring more difficulties for vulnerable communities. Juror Kulbhushan Upmanyu criticized Indias National Action Plan on Climate Change. Plans that would replace community forests with private plantations for carbon sequestration would undermine peoples adaptation capacity. A delegation from the hearing will take their grievances to Copenhagen. The hearing was convened by non-profit Indian Network on Ethics and Climate Change.

Fast unto climate deal Eight young people from Australia, Sweden and USA launched a hunger strike on November 6 to express their outrage at the slow pace of global climate talks. The activists said they will continue their protest until the end of the Copenhagen climate talks. They hope their presence at the summit will pressure world leaders to agree to a legally-binding deal.

condoms to fight climate change The UN Population Fund (UNFPA) has pledged distribution of free condoms and other contraceptives linking its family planning advocacy to climate change for the first time. In a report, UNFPA said for every one billion rise in the worlds population, greenhouse gas emissions increase by one to two billion tonnes. Critics argue other factors like consumption levels matter more than population.