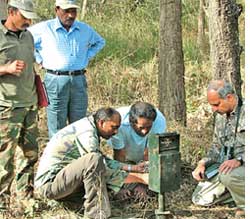 camera traps work well to estimate species diversity of medium and large mammals, a recent study says. Counting the number of mammals in dense tropical forests is difficult and rare species are often missed out. Camera traps offer a new tool for finding the number of large and medium sized terrestrial mammals. But the method is not foolproof and researchers point out the importance of having an adequate camera grid size. Larger the grid size, lower the population density estimates.

For the present study, researchers looked at mammals in lowland moist Amazonian forests of Peru. Camera traps were set up for two 60-day periods. The cameras were positioned in pairs, facing each other across the trail and each pair was separated from the next by two km in a grid-like manner. The first 60-day period had 24 cameras set up and 40 cameras were used in the second period. Passive infrared cameras were used to study capture capability--whether larger animals were photographed more frequently or not. The researchers looked at how this capture capability was affected by the spacing between a pair of cameras and between pairs of cameras.

Data showed that spacing was not an issue. But larger the animal greater were its chances of being photographed. The study, published in the June 2008 issue of the journal Animal Conservation (Vol 11, No 3), found that cameras captured 86 per cent of all known species in the area. But the number of times each species was photographed varied greatly. The researchers concluded that for some species more cameras were needed, indicating the need for a greater survey effort. Also, for species that are found only in certain habitats or that rarely use trails, habitat specific traps needed to be set up.