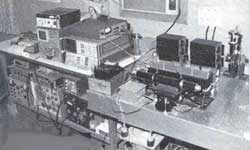 The ozone layer, which shields life on earth from the Sun's harmful ultraviolet radiation, is slowly disappearing from the upper reaches of the atmosphere, especially over the South Pole. Hence the need to monitor this loss.

However, there are problems with the ozone-measuring devices. Satellites and ground-based instruments, for instance, sketch a very general picture of the ozone profile - the total ozone lost over a span of 40 km. To get a more refined record, layer by layer, scientists use balloon-borne instruments. But keeping balloons steady in Antarctica, which experiences gales with speeds up to 300 kmph, is not easy.

To tide over this problem, scientists at Delhi's National Physical Laboratory (NPL), in collaboration with French scientists from the Meudon Observatory near Paris, have devised an instrument that can record a layer-by-layer profile of ozone sitting on earth. The instrument, called a laser heterodyne, was recently used by the Indian scientists in Antarctica to monitor not only ozone but also various other trace gases over the icy continent.

The device uses a carbon dioxide laser, which is tuned to the frequency of the molecule sought to be detected, and blended with sunlight carrying the signature of the molecule in the form of its absorption spectrum.

The bledded signal is then passed through a grid that diffracts or splits the light. The diffracted portion of the light is picked up by a detector and an analysis of its spectrum gives the precise level of the compound sought.

Says 8 M Reddy, the head of the radiosciences division at NPL "There is nothing earthshaking aboLe the technology used in this instr ment. Western nations did not nug an attempt to produce it, simpor because it was a very expenstim proposition, in terms of labour- it required about 5-6 scientists com pletely dedicated to it for 4 years it was well worth the effort as the machine allows extremely precrw measurements of several diffe atmospherivc6ristituents."