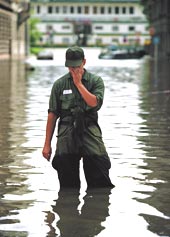 "Natural catastrophes, a vast majority of which have been weather-related, have cost countries and communities an estimated us $56 billion during the period January to September 2002," said a un statement.

The document reveals that more than 9,400 people died in these disasters -- more than 8,000 in Asia. While the costs were almost us $33 billion in Europe, they were put at us $14.8 billion in Asia and us $7.7 billion in North America.