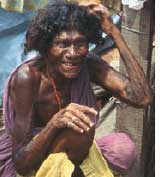 Slum dwellers will soon be part of a year-long survey covering nearly 15000 villages and blocks in urban centres. The survey will be carried out by the Union urban development ministry starting July 1.

According to the National Sample Survey Organisation director general, P K Ray, the survey will bring forth the living conditions in urban slums, hardships faced by the slum dwellers, their socio-economic status and the place of their migration. According to the Planning Commission's estimates, nearly 62 million people of the total 1.2 billion population lived in urban slums in India in 2001. There will be a shortage of around 25 million houses for them in the next five years.

In Delhi alone, there are around 860 slum clusters. Each is said to have between 100 and 1,000 huts, with a total population of about four million. Delhi Mayor Arti Mehra said that around 800,000 dwelling units were required to accommodate slum dwellers so that they had access to basic health, educational and other facilities.