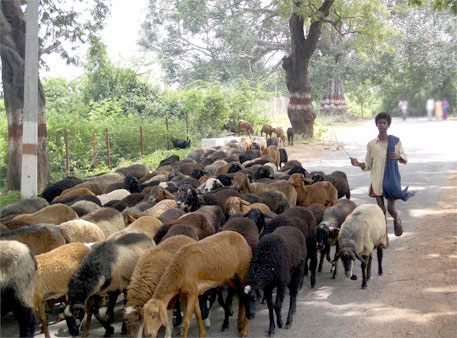 The authorities from 15 countries came together to take a pledge to eradicate devastating animal disease “Peste des petits ruminants” (PPR) which mainly affects sheep and goat across the world, especially Middle East, Southeast Asia and Africa. If it happens successfully, then it would be second deadliest animal disease to get eradicated. Before this, rinderpest was eradicated from the world in 2011.

According to United Nations food agency Food and Agriculture Organization (FAO), PPR is estimated to cause over US $2 billion in losses each year—mostly in Africa, Asia and the Middle East—and its elimination will improve food and nutritional security for billions of consumers and especially the more than 300 million vulnerable households who keep sheep and goats in the affected regions.

On April 3, the concluding day of a three-day convention in Abidjan, capital city of Cote d’Ivire in Africa, the world leaders took a pledge. Ministerial delegations (along with more than 300 participants from across the continents) and representatives of regional and international organisations agreed to a plan drawn up by FAO and the World Organisation for Animal Health (OIE) and presented at a meeting organised by the two institutions with the Government of Cote d'Ivoire

PPR is caused by a virus that can kill as many as 90 per cent of the animals it infects within days. After a rapid expansion over the past 15 years, the disease is now present in around 70 countries. It is also related to rinderpest, the cattle plague that FAO and OIE declared as eradicated in 2011, thereby ending a primary cause of famine and unrest in recent centuries.
The 2.1 billion small ruminants in the world—80 percent of which live in affected regions—are critical assets for poor rural households in developing countries. They provide quality protein, milk, nutrition, fertilizer, wool and fibre as well as income opportunities and financial flexibility.

According to the press release, if adequate resources are coordinated at all levels then PPR can be eradicated in half the time it took to eradicate rinderpest. For its complete eradication, strong political commitment from national government and effective engagement with veterinary services and rural communities is needed.

"We have a plan, the tools, the science, and the partners," said FAO Director General José Graziano da Silva. "Eradication of PPR is not only within reach, but also in our hands. With OIE, we have agreed to establish a joint secretariat for the implementation to be hosted by FAO."

"We can mobilise now public and private components of national veterinary services worldwide to influence our strategy," stated OIE Director General, Vallat. "Improving animal health is our duty and our passion."

The plan developed by FAO and OIE is estimated to cost from US$ 4 to US$ 7 billion over a 15-year period. Annual savings generated by eradication are expected to quickly pay back the investment required. FAO and OIE believe that this could be done in less time if they have the strong support from governments, partners and regional organisations.

Moreover, the campaign will produce very significant collateral benefits, both by boosting the goods and services of the national veterinary systems that can control other livestock diseases such as brucellosis or foot-and-mouth disease, and because eradication of the PPR threat will unleash greater investment in the sector, improve nutrition, and secure people's livelihoods.
According to the international health agency, demand for meat and milk from small ruminants in Africa is expected to rise by 137 per cent from 2000 to 2030, and even more in Asia. It is the diseases that cripple the efficiencies in reaching these needs, says FAO.