Pact struck on water sharing in the US 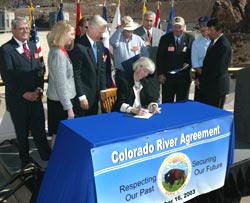 it is not often that riparian states are able to sink their differences and resolve a meandering water-sharing dispute. A breakthrough of this nature was achieved in the us on October 16, when Secretary of the Interior, Gale Norton, inked the Colorado River Water Delivery Agreement in Nevada. Despite the fact that the pact was inordinately delayed and scepticism prevails about its feasibility, a modest step seems to have been taken to usher in a new era of cooperation on the river.

"The agreement (also known as the Quantification Settlement Agreement or qsa) marks a turning point for California and the Colorado river basin states," said Norton. Under the deal, California is required to take steps during the next 14 years to reduce its over-dependence on Colorado river and stop dipping into the shares of the six other river basin states -- Colorado, Utah, Wyoming, New Mexico, Arizona and Nevada. Owen Lammers of Living Rivers, a policy advocacy group, feels water will now be diverted where it is in short supply -- to the upstream states.

It was way back in 1922 that representatives of the seven states met to discuss an allocation plan for water from Colorado river. The participants calculated that the waterbody could deliver 16.4 million acre feet (maf) on an average. Of this, 7.5 maf was allocated for the upper basin states (Wyoming, Colorado, New Mexico and Utah) and 7.5 maf for the lower basin states (Arizona, Nevada and California). Subsequently, the Boulder Canyon Project Act was enacted in 1928. It further divided the lower basin's share, with 4.4 maf going to California, 2.8 to Arizona and 0.3 maf to Nevada.

In the beginning, the formula appeared to be working smoothly. However, when the upstream states began to utilise their share of water, problems surfaced -- the biggest being caused by California, which has traditionally tended to exceed the amount allotted to it by 25 per cent. Significantly, about 80 per cent of the water California gets from Colorado river is used for agriculture. Over half of this is needed for growing alfalfa and other forms of cattle feed, which are extremely water intensive.

Lammers believes that a change is imperative in order to allow water to reach the cities as well as to leave some amount for environmental restoration. But farmers have been reluctant to switch to other crops because cattle feed is easy to harvest and water is subsidised, he adds. In fact, they have already gone to court challenging qsa's validity.

Michael Cohen of the Pacific Institute in Colorado is of the view that some lessons have been learnt from the negotiation process. These include the need to involve all stakeholders, accord priority to environmental and community interests, and make beneficiaries pay the full cost of water transfer.