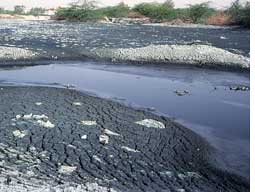 on april 11, the Jodhpur bench of the High Court of Rajasthan ordered closure of 126 industries operating in non-conforming areas in Pali, infamous for pollution from its dyeing and printing industries. The court issued two orders in response to petitions filed by industry groups--one led by Aruna mills and the other by Rajaram mills. The groups had challenged directives issued in a meeting chaired by the state minister of environment and forests in July 2007. The directive recommended closure of industries operating in non-industrial areas to check pollution in river Bandi.

In its first ruling, the court ordered the respondents--pollution control board, the Rajasthan Industrial Development and Investment Corporation and the common effluent treatment plant (cetp) trust--to coordinate with each other under the Pali collector to ensure that all the petitioner-industries are shifted to industrial areas within four months. The second order ruled that the state bodies should ensure within six months that treated water is recycled or used for agriculture. It also asked the pollution board to set up a flow meter at every industrial unit to measure their actual discharge.

The Centre for Science and Environment, a research and advocacy organization in Delhi, in a study in 2007 had said that the cetps were unable to treat effluents to the prescribed levels, which resulted in the discharge of untreated and partially treated wastewater into the Bandi river, which does not have freshwater for about nine months a year. Contaminants percolated to the groundwater. The study found that groundwater in the Bandi basin at 50 km downstream was contaminated with lead, arsenic, chromium and nickel.

The orders have come as a "huge relief" for the Kisan Sangharsh Samiti, a farmers' group that has been protesting against pollution in and around Pali. According to R B Maurya, regional officer, pollution control board, they have started taking action by suspending power supply to the non-conforming industries.