Residents of Delhi's slums find themselves in a Catch-22 situation. Public conveniences in the Capital are woefully inadequate, but when they are compelled to defecate outdoors, residents of adjoining colonies take them to court. 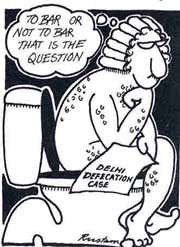 RESORTING to legal redress to get public areas free of defecators may soon become the norm in the Capital. And, given the burgeoning slum population and the dismal state of public conveniences, the entire city may soon be caught in a debate on the tricky issue of allowing public areas to be used as public toilets.

Residents of Satyavati Colony in northwest Delhi, following in the footsteps of inhabitants of nearby Ashok Vihar, secured a high court order barring slum dwellers from defecating in open spaces adjoining residential colonies. When the residents moved the court, the municipal corporation of Delhi (MCD) immediately fenced off Sawan Park, the disputed area. The court also directed the police to build an outpost to stop people from defecating there.

Ashok Vihar residents earlier, won an order barring slum-dwellers in the Wazirpur industrial area across the railway track from them from defecating in a park adjacent to their colony. The court ordered the Delhi Development Authority to build a wall around the park and organise patrolling by about 75 police personnel to prevent slum-dwellers from defecating there (Down To Earth, 31 May, 1992.)

Slum-dwellers affected by the court ruling are irate. "How long do we wait for redressal?" asks Shivcharan Seel, general secretary of the slum dwellers welfare committee in Satyavati Colony. "To say no without providing an alternative is a wrong thing to do. They are pushing us a bit too far. The authorities must realise this is one problem that cannot be put off." The slum welfare association had asked for a portion of the park on which to build conveniences for women, but MCD refused.

About 2.1 lakh of Delhi's slum-dwellers are entirely dependent on public conveniences that are woefully inadequate. Civic authorities find it difficult to manage even the existing conveniences and are handing them over in phases to Sulabh International, a private organisation that sets up and maintains public toilets.

In the Sawan Park area, there are MCD-run public toilets. But there are only 24 latrines to cater to the few thousand slum dwellers. Counters Seel, "Do you want us to stand in long queues to defecate?" The most discomfited are the women. Chameli Devi laments, "How can we go back and forth and wait for hours?"

In the Ashok Vihar case, the MCD suggested the construction of public conveniences and mobile toilets. But as soon as it began construction on public land in October last year, factory owners of the Wazirpur industrial area got a stay order from the court. Only 5 of the 9 mobile toilets proposed have been put up but they are not functional. As a result, people are defecating within a few feet of their shanties and insanitary conditions prevail in the slum.

Northwest zone deputy commissioner of police Deep Chand says, "We are on the brink of an epidemic. Even our constables refuse to sit in the booth."

The restive slum dwellers have made the police outpost and the park wall the targets of their protest. Demonstrations, picketing and frequent breaching of the boundary wall have become regular features.

Says Seel, "Police involvement in this war against the natural right of a man is objectionable. What is this show of might in aid of?"

Police personnel agree. Says Chand "A time may come when we may have to deploy the entire police force to stop people from defecating."