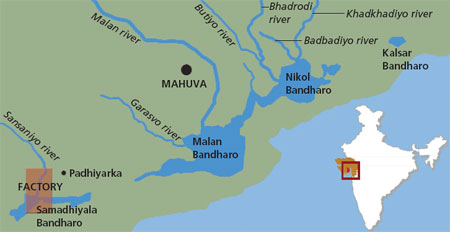 FARMERS of 15 coastal villages in Gujarat’s Bhavnagar district have intensified their stir against Nirma company’s cement plant proposed on a waterbody. Activists are mobilizing people against the plant by screening films showing the impact the project will have on farmers of Mahuva tehsil.

The latest round of protests were preceded by a Gujarat High Court order. On September 27, the court rejected the farmers’ appeal to review its order allowing Nirma to proceed with construction (see ‘Nirma cement plant cleared, Down To Earth, May 16-31, 2010). The court asked Nirma to return 46 hectares (ha) of the 214 ha it was allotted in April this year. But farmers want the project scrapped. They said the Union environment ministry’s clearance to the project in May 2008 was faulty as Nirma did not mention the waterbody at the site during the public hearing that preceded the clearance.

It was built under the state’s salinity control project and provides water for farming and drinking. Three more check dams were built along the coast of Mahuva tehsil, which farmers said has reduced soil salinity and revived agriculture. “We could barely raise one crop a year. Now we grow three,” said 55-yearold Dhanabhai, a farmer of Nape village. He said farmers can earn up to Rs 2 lakh a year from each acre (0.4 ha); people who had migrated are now returning to farming.

But the Nirma plant may turn the clock back. The state government had given 4,460 ha along Mahuva coast, on lease to Nirma for mining limestone. So farmers, besides worrying about displacement and loss of income, are concerned the limestone barrier guarding their land against seawater, would be fed to the cement plant and the soil would turn saline. “For us, the green revolution came so late. Our 15 years of hard work will go in vain,” said Khimjibhai, sarpanch of Padhiyarka village.