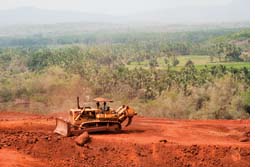 It's not often that villagers done in by powerful mining interests can take them on and win. But that's exactly what's happened in Goa, with the Panaji bench of the Bombay High Court directing six mining companies to deposit in excess of Rs 36.5 crore as compensation for villagers whose farms have been destroyed by large-scale mining.

In 2004, farmers in Surla, a village in Bicholim taluka, North Goa, filed a petition asking for compensation from the companies. Three years on, the court directed the six companies, on August 8, 2007, to deposit the money with the court by August 30, 2007. It will be distributed among 761 farmers. V M Salgaonkar & Brothers will have to pay roughly Rs 85.57 lakh; Chowgule & Co and V S Dempo & Co will pay roughly Rs 85.53 lakh each; and Salgaonkar Mining Industries, D B Bandodkar & Co and Timblo Pvt Ltd approximately Rs 36.66 lakh each. The money has already been deposited. The court also said payments made between 1997 and 2007 will be adjusted, against production of documentary evidence.
The villagers term the court verdict as their "united" victory against the mining lobby and environmentalists say this could be the beginning of a new trend in compensation-related litigation. "We are happy to get our dues. All this time, the mining companies made money while our fields and crops were destroyed due to silting and dust pollution from 1993," says Gokuldas Gaonkar, chairperson, Surla Gram Kruti Samiti, a farmers' body. "The village is full of stories about how the mining companies tried to divide us, either with money or other benefits, but we were determined to stand together."

"Surla has taught an important lesson to all united, you can take on the powerful mining lobby and fight for your rights," adds environmentalist Rajendra Kerkar, who works in areas affected by mining activity in North Goa. The reaction has been almost instantaneous, bearing out Kerkar's observations. Farmers from neighbouring villages have already started approaching the Surla samiti for help.

The farmers' cause was helped greatly by a committee appointed by the state government on April 5, 2005. In its report on loss of crops caused by mining from 1993, the committee suggested farmers be paid compensation for loss of yield. Going by this report, the court asked the mining companies to pay compensation for the period January 1, 1993-December 31, 2006. The report said that due to silting, approximately 1,090 hectares had been affected. It added that the damage was so deep that removing the silt at one go could make it more difficult for cultivation and the loss of the soil's fertility and water-retention capacity could not be quantified.
Though the mining companies have accepted the order, they allege villagers failed to remove the silt from their fields despite being paid to do so. "We have been paying money to farmers to desilt their fields for the last eight years. Since they never removed the silt, it kept on accumulating. The farmers were also compensated for crop loss," says S Sridhar, executive director, Goa Mineral Exporters' Association. The companies also say compensation was never an issue. "We want to ensure that the farmers revive farming with the compensation money, rather than keep their land fallow," Sridhar adds.

But not everyone buys this. A V Bugde, deputy collector, Bicholim, who has followed developments in Surla, says "So far compensation couldn't be paid to the farmers because the mining companies couldn't arrive at a consensus on sharing it." He has been appointed court commissioner for the disbursement of the amount to be deposited with the court.

The mining companies are clearly under pressure. Apart from the compensation, they will also have to put in place protective measures--for catchment drains, protective walls to arrest silt, check dams and ponds, and afforestation. The court will review progress in a year and rule on more compensation.

For Surla's farmers it's been a victory well won.