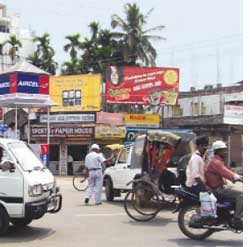 Over 100,000 commercial and private vehicles will be off Tripura’s roads soon.

On March 22, the Agartala High Court ordered the state government to withdraw vehicles in use for 15 years or more in a phased manner; they comprise more than a third of Tripura’s 288,000 vehicles.

The court also criticized the role of police and transport officials in managing the traffic in Agartala and ordered the government to set up more emission testing centres immediately to enforce the prescribed standards for exhaust emissions, including testing for greenhouse gases. The court also directed the police and transport authorities to punish owners of overloaded passenger vehicles and ensure all two-wheeler drivers wear standard helmets certified by the Bureau of Indian Standards.

The order was given on a public interest petition filed by a non-profit, Association for Research on People and Nature (arpan).

Responding to the court order, the Tripura Natural Gas Company Ltd (tngcl), a joint venture of the Gas Authority of India Ltd and the Tripura and Assam governments, announced all public and private vehicles in Agartala would switch to compressed natural gas (cng) fuel by 2013. tngcl chairperson Pabitra Kar said emission testing centres can’t reduce pollution on their own, but converting vehicles to cng will.

Secretary of arpan, B Bhattacharjee, said authorities have been forcing private vehicles to convert to cng whereas it is the “school buses, government vehicles, goods carriers and passenger vehicles that are emitting pollutants”. He said passenger vehicles are overcrowded. Even after four persons died of suffocation in overcrowded inter-state passenger buses in 2007, police and transport officials have not punished the vehicle owners, said Bhattacharjee.

Transporters opposed withdrawal of all old vehicles. Chanchal Mazumder, leader of left party-backed Tripura Motor Shramik Union, said there are many vehicles that are more than 20 years old but are still roadworthy and conform to emission standards. He said some of the newer vehicles pollute more.