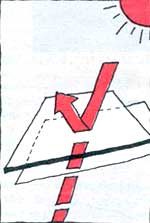 Those who handle expensive cameras know the importance of silica gel - these granules normally put in a small cloth bag are essential to protect the lenses from moisture which could induce formation of fungus. Silica gel belongs to a class of highly porous, sponge-like solids called aerogels, which find diverse applications in industry and research. Now,' some researchers in the US have found a cheap way of producing aerogel films which could give rise to a host of new applications.

Aerogel films can be used as reflective and anti-reflective coatings in optics. In electronics, these films can be used as insulating layers. in the field of architecture, they are being used as super-insulating glazings (both transparent and opaque) for energy efficiency. Aerogels are also being used in detecting high speed elementary particles as in Cerenkov detectors.

Normally, silica gel is formed by condensation of a chemical compound containing silica, like tetraethoxysilane. The gel consists of branching chains of minute, nanometre size (a nanometre is a thousandth-millionth of a metre) silica beads. Between the chains there are voids of about 50 nanometres which are filled with liquid. The problem is that if the gel is dried in air, the compressive effect (due to the capillary forces) experienced by the wet gel forces it to collapse irreversibly.

In 1931, a scientist - S S Kistler - discovered a novel way to preserve the gel network by transforming the liquid within the pores to a supercritical one by raising the temperature and pressure above the critical point (A substance is said to be in a critical state - critical temperature, critical pressure and critical volume - when the density of the liquid phase is the same as of the vapour phase). For this, the drying has to be done under pressure in an autoclave (a strong vessel used for chemical reactions at high temperature and pressure) thereby making the process cumbersome, hazardous and expensive. This severely restricts the commercial exploitation of aerogels (Nature, Vol 374, No 6521).

Now, Sai S Prakash and Sudeep M Rao of the University of New Mexico and their colleagues have developed a new method of producing gels which does away with the drying in the autoclave. Using a simple method at normal pressure, the group has been able to generate highly porous aerogel films.

The technique involves adding surface groups - chemical groups that remain on the surface - which are different from those ordinarily used. The inner surface of these gels is coated with the silyl group instead of the usual hydroxyl group. In ordinary gels, the adjacent hydroxyl groups condense on compression and form new bonds which counter the elasticity of the silica gel network. In the modified gels, the silyl groups being chemically inert, they are able to detach as the pressure is released. The gel contracts on drying but gradually springs back towards a porous state.

Aerogels are the most highly porous material known to us. Their porosity could be upto 99 per cent corresponding to a density of 20 kg per cubic metre (in comparison, water has a density of 1000 kg per cubic metre). The new technique for the manufacture of aerogels could be revolutionary not only for producing aerogel films but also for bulk aerogels which are required for many applications such as insulating material.