Groundwater sale continues in Goa in violation of new law 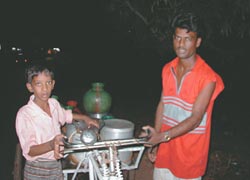 A law enacted to check the illegal sale of water in villages located in the northern parts of Goa has proved to be a damp squib. Tanker operators are openly flouting the state's Groundwater Regulation Act, which was passed in 2002 and notified in 2003.

The main objective of the regulation was to curb the sale of water in areas such as Saligao and Pilerne villages. These two scenic regions of coastal north Goa lie off the water-stressed tourism belt, and have been milked dry by the water mafia. They have witnessed large-scale groundwater extraction for over a decade because of the burgeoning demand spawned by mushrooming industrial estates on parched hilltops and hotel chains along the coast, along with the overall urban sprawl.

As Goa experiences abundant annual rainfall (up to 100 inches), villagers traditionally fall back on wells to meet their water needs. But local people say that the water shortage has been severe during the past two years due to poor monsoons in the state. Against this backdrop, unscrupulous tanker operators have compounded the crisis by drawing and selling millions of litres of water from villagers' wells. Worse still they continue to do so, notwithstanding the recently enforced law. Their task is made easier since most villagers are unaware of the legislation.

Appallingly, the concerned authorities feign ignorance about the illegal activity. "Are they selling water again?" asks an official with characteristic insouciance. In fact, instead of taking action against the culprits, the state government seems to be waiting for the people to complain. "We get reports of water being extracted early morning and late at night. The people are not well-versed with the rules and some neighbours are not coming forward (with complaints)," claims Jagdish S Hosamani, groundwater officer of north Goa.

Officials maintain that they have given notices to some illegal operators and seized "one or two" water tankers. "But we have to catch them red-handed because we need hard evidence," asserts Hosamani. He reveals that around 24 tanker owners -- mainly from Saligao, Pilerne and Sangolda villages -- even approached him for permission to transport water out of the village areas.

For their part, villagers claim that the police are not taking adequate measures to curb the rampant sale of water. "Last month, we seized a tanker that was carrying water to Porvorim. But the police took two hours to respond to our complaint," alleges Fatima Fernandes, a member of Pilerne's panchayat.

Harish Madkaikar, an inspector in the Calangute police station, however, contends that the cops' role in implementing the act is "really limited". He explains: "We can give protection and assistance to the water resources department only when it is required." Mario Mascarenhas, who had filed a case against excessive extraction of water from Sangolda in the 1980s, counters: "The police should not put the ball in the citizens' court. They have a list of the errant well owners and can immediately nab such culprits." Saligao resident Joaquim D'Mello points out: "The miscreants earlier carried out their activities on the sly. Now they do so in broad daylight."

Meanwhile, the selection process of "water scarce" villages is also mired in controversy. Sangolda village is a case in point. Nestled between tourist attraction Calangute and rapidly developing Porvorim, Sangolda was hit by an acute water shortage sometime in the 1980s. But it is yet to be included in the list of 'overexploited' areas in accordance with the new law.

Faced with a water crisis and official apathy in dealing with it, Saligao is now taking steps to initiate rainwater harvesting in the area. "To an extent, we are also to blame for the situation coming to such a pass. We have been neglecting our wells," observes an 83-year-old villager, and puts pertinent posers: "Do people still build tollems (ponds) now? Are we desilting stormwater drains?"