Crazy ant gets a name 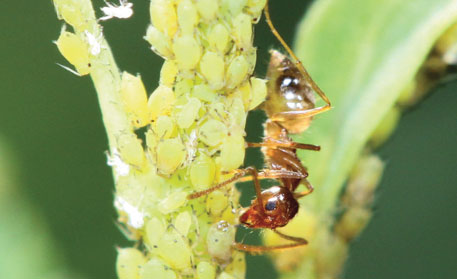 HOW do you fight your enemy if you do not understand its nature? This has been the case with the invasive Rasberry Crazy Ants, called so because of their random and crazily quick motions. These ants enter electrical appliances, where they cause short circuits by chewing off the parts. They were first noticed in Texas a decade ago by Tom Rasberry, a pest exterminator, who realised that their number exponentially increased from thousands to millions in just one year. Though he tried to warn the authorities, his calls went unheeded.

The scientists identified that the ants belonged to the genus Nylanderia, but were not sure if the species was N pubens or N fulva. For want of a scientific classification the species was named after Rasberry. Soon, the ants spread to neighbouring states like Mississippi and Louisiana and could have gone as far as the Gulf Coast states. However, scientists at the Smithsonian Institution and Towson University in the US, solved the first and most important part of the puzzle in time. They have identified the ant species as N fulva.

“We pinpointed the species using molecular sequence data and by examining the male genitalia of worker ants,” says John Lapolla of the Department of Biological Sciences at Towson University. He is the co-author of the study, published in PLoS ONE in September.

There are no published reports on where this ant was originally found and how it got introduced in Texas. “Based on where it was first described over a century ago, it is probably from southern Brazil. How far the distribution goes from there is unknown,” says invasive species researcher Terrence McGlynn of the University of Colorado, who was not involved in the study.

These ants have an acidopore in their abdomens through which they exude chemicals that cause a burning sensation on the skin. Apart from causing economic losses by destroying electrical equipment, these ants spell trouble for animals too. They bite the cows in the eyes and nose and suffocate the poultry to death by crawling into their nostrils. They also raid birds’ nests and destroy bee colonies. All efforts to kill the species using pesticides have failed till date. “Biocontrol efforts depend on species-level identifications. Now that we have identified the species, it can help decide the best method to exterminate these ants,” says Lapolla.