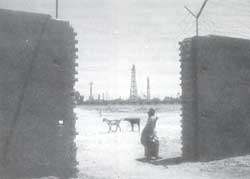 OVER the last 30 years, severe soil degradation has ravaged the state of Gujarat. If this trend continues, as much as 30 per cent of the state's land resources could be completely degraded by the turn of the century, warns a recent report of the Gujarat Ecology Commission (GEC).

"Increasing salinity within the region is a matter of great concern for Gujarat as the state has planned large-scale development activities," says a GEC official. P P Patel of the geology department of Maharaja Sayajirao University, Vadodara, and eminent geologist S S Merh, who conducted the study, reveal that out of the 19.18-lakh hectare (ha) Gulf of Khambhat region, 54 per cent has already become saline, while an additional 38 per cent will follow suit by the year 2001. Officials say that the government withdrew the report from certain departments fearing that, if made public, the report could have negative repercussions on the inflow'of foreign investments to the state.

Sparse irrigation, says B R Sharma, additional director-general, Indian Council for Agricultural Research (ICAR), New Delhi, is probably responsible for Gujarat's sad plight. About 37.4 per cent of the total cultivated area in India receive irrigation. In Gujarat, however, the figure plummets further: only 32 per cent of the 50 million ha of cultivated land are irrigated. And though the state government launched several schemes in the past, these were too limited, in scope to make these any difference. Sharma blames half-hearted management policies for the hydrological imbalance the state is experiencing.

"Most of Gujarat's ecosystems are fragile. Now that the problem has been aggravated, the government will find it difficult to restore these," says S Bandyopadyay, senior ecologist at GEC. 'Right now, the main problem is of identifying the cause of land degradation. And solutions are not in sight. "Even if the various departments come up with solutions, there will be a need to implement these properly. And that will prove tough," says a government official.

A major part of Gujarat is flat, in a topographical sense. In such areas, when the groundwater depletes, seawater fills up the gap, thus increasing the salinity of groundwater. This trend has continued for a long time due to over- exploitation of groundwater and has led to severe land degradation, says Bandyopadyay. Some government officials blame the state government's apathy, saying that it should have taken note of the problem much earlier.

Suren Choksi, a Vadodara-based geologist, says the groundwater in the state has rarely been recharged. "The vacuum of the sub-strata water has been filled up by the saline sea water, which has degraded the precious fertile land of central Gujarat. This is also the area where maximum industrial development has taken place."

Over extraction of groundwater has adversely affected the groundwater recharge and discharge balance. Data collected in the last 16 years show that in the area between Narmada and Sabarmati, there is an average increase of 800 part per millions of the total dissolved solids in the groundwater.

The water source has come under further stress. Rising demands from irrigation, industry and urban consumption have induced extensive depletion of groundwater resources. Further, data prepared by the Forest Survey of India in 1990 show large-scale degradation of the forest wealth in the area. The state forest department, however, says the forest cover has increased during 1991-93. There has been a net increase of 13,700 ha in total forest cover in this period.