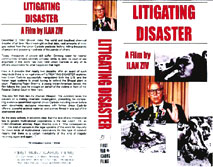 December 3, 1984: the biggest industrial disaster of all times strikes Bhopal. More than 20 years later, the victims still await justice. In this film under review, director Ilan Ziv follows Rajan Sharma, the counsel for the gas victims in the civil suit in the district Court of New York, usa, as he voices the survivors' unheard cries.

Ziv uses the litigation as the narrative thread for the film. The evidence Sharma presents clearly implicates the us multinational Union Carbide (uc) for the leak in its pesticide plant in Bhopal. The leak let loose some 27 tonnes of the toxic chemical, methyl isocyanate (mic) over the sleeping city. In 1991, the Supreme Court of India approved a collusive settlement between the government of India and the uc amounting to us $470 million to discharge all claims for compensation against the us company -- a fraction of the nearly us $3 billion that the Indian government had claimed as damages.

Litigating disaster is shot like a case in progression with the lawyer making the opening statement in a mock courtroom setting: "Ladies and Gentlemen of the Jury, we will show that in this case, the industrial disaster at Bhopal was not just an accident but a systematic, endemic, sustained, apathetic and reckless behaviour on the part of the defendants (uc). In course of the case, you will see some of the key evidence that has been collected in order to hold uc responsible for the disaster. Even though the uc has tried to move ahead and would want to close off Bhopal, we would not rest unless they answer for the criminal code of their conduct.

The film opens with a shot of the derelict Union Carbide factory, surrounded by tall grass and a slum. Sharma follows a policeman to the industry premises and walks around the space. The images are juxtaposed with the narrative of the tragedy. The revelation of hard facts through court evidence and witness testimonials follows.

The director has captured some terribly disquieting images. There is the archival footage of a helpless doctor, a girl wailing for her dead father, Warren Anderson (ucc hairperson at the time of the calamity). There is also an interview with the former assistant manager of safety at the company in Bhopal, who reminisces on his association with his former employers.

Back at the court, witnesses and exhibits are introduced. Hamidia Bi (a survivor), Satinath Sarangi (from the voluntary organisation, Bhopal Group of Information and Action), Kamal Pareek (former assistant manager of safety at the uc Plant) and Rajkumar Keshwani (Bhopal journalist) present their testimonies.

Archival interviews of Anderson, testimonies of a former ceo of the company and others officials associated with the uc are also used. In all we are presented with a chilling mass of evidence, which relate both the present and the past of the company.

Sharma has ferreted out other incriminating evidence. These include old sales films prepared by the uc, initial planning decisions and the basis on which the uc management took its decisions on the Bhopal factory. What's stark is that the factory received sub-standard technology.

Litigating disaster highlights corporate negligence through eight sections. Section one recreates the horrific account of what happened at Bhopal on that fateful night and how through archival footage and personal accounts of Hamidia Bi and Satinath Sarangi. Section two deals with the evidence on how uc bosses in the us shirked all their responsibility towards safety in the Bhopal factory, even though they were actually taking all key decisions pertaining to it. The third point raised by Sharma is why a hazardous industry was allowed to set up shop in the centre of the city. The investigation leads the lawyer to more evidence of corporate greed at the cost of the poor and vulnerable economies.

The next few sections detail even more callousness: the uc factory had no evacuation plans. All this would have been regarded an offence in the us. However, the uc manipulated the economic situation of the victims and ensured that the case be sent to India where they were not liable to be present for any proceedings.

The film intends to raise consciousness about the Bhopal gas disaster. It does so very effectively through devices of courtroom drama and historical narrative.

Ritika Shrimali is a research scholar at the department of geography, Delhi School of Economics, University of Delhi. A version of this review was done for H-Net: Humanities & Social Sciences Online. Published with due permission from H-Net