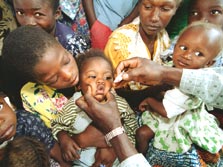 West Africa is hell-bent on eradicating polio. In a remarkable effort, via "synchronized" national immunization day (nid) programmes from October 19 to 26, thousands of volunteers and health workers fanned out to administer the oral polio vaccine to 15 million children in Benin, Burkina Faso, Ghana, Niger and Togo, and previously unreachable areas in currently stable Sierra Leone, Liberia and Guinea (Conakry).

This was but the first round of a massive programme, launched mid-October at Lungi, Sierra Leone, to save 80 million children from the debilitating disease in 16 West African countries. West African leaders attended the launch, along with representatives from the World Health Organization, the United Nations Children's Fund, Rotary International and other polio partners. The second round will be held from 22-26 November. Nigeria will undertake subnational immunisation days in October followed by full nid rounds in November 2003 and then in January 2004.

Despite political uncertainty, the country must stick to this schedule. After all, the us $10 million campaign is nothing but a response to a fresh outbreak of the disease in the region that originated from poliovirus genetically traced to northern Nigeria. Moreover, reports had begun to trickle in -- since July this year -- of children becoming paralyzed by the disease in precisely those countries that figure in the campaign's first phase. The epidemic has thrown out of gear international efforts to eradicate the disease worldwide by end-2004.