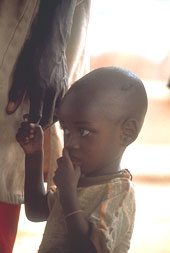 Africa is reeling under a double whammy. As if the erratic weather pattern that has led to a widespread famine was not enough, corruption and mismanagement has compounded the people's misery. Two seasons of crops have been devastated, first by flood and then by drought. The continent is grappling with severe food shortage. Millions in Malawi and other southern African countries are suffering from hunger.

Around 145,000 tonnes of food, worth us $69 million, will be needed to plug the shortfall in crop production. The donors have pledged only us $3 million. Even though the erratic weather is mostly to be blamed for the present situation, civic organisations say that the crisis has been worsened by shady deals. Malawian officials sold the country's 167,000-tonne emergency grain reserve and have not accounted for the proceeds. As a backlash, the International Monetary Fund (imf), Britain and the European Union have frozen us $75 million in aid payments.