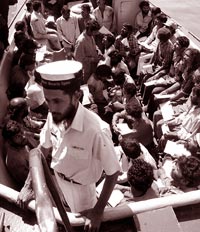 the talks between India and Pakistan on Sir Creek, which ended on August 7, 2004, remained inconclusive, disappointing fisherfolk and peace activists. The creek, a small strip of water along the Rann of Kachch (in India) and Sindh (in Pakistan), is at the centre of a 22-year-old dispute between the two neighbours. Due to absence of proper border demarcation in the area, fisherfolk of both the countries unknowingly enter each other's territorial waters, endangering their lives. Many of them have been languishing in jails for years.

"Fisherfolk of Pakistan and India pray in earnest that the Sir Creek dispute is resolved because large number of Pakistani and Indian fisherfolk are languishing in each other's jails, some of them for over five years," said Saeed Baloch, a leader of Pakistan Fisherfolk Forum (pff). According to pff, there are 112 Pakistani fisherfolk in Indian jails and 250 Indian fisherfolk in Pakistani prisons. In 1914, the then government of Sindh and the Maharao of Kachch, the ruler of the place, had agreed to a boundary running through the middle of the creek as the border. But speculation that the area has rich deposits of oil has made negotiations between the two countries tricky.

"It's a technical issue but since there was lack of understanding between the two neighbours, it became a political issue," says Mutahir Ahmed, assistant professor at the University of Karachi. "It's a good omen that talks were held in an amicable atmosphere and hopefully the issue would be resolved in the next round of negotiations," he adds. If this does not happen, the matter will be referred to the un by 2012, Ahmed points out. Pakistan earns an average of us $125 million per annum from its fisheries sector.