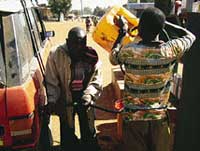 The prolonged shutdown of oil refineries in South Africa has sparked a critical shortage of fuel, stemming from a change to cleaner fuels like unleaded petrol and low-sulphur diesel.

Many petrol stations are running short of fuel. Some flights in South Africa were cancelled due to fuel shortage. This shortage has come at a time of peak demand, with many South Africans heading to holiday destinations. The South African authorities are holding crisis talks with petroleum providers to try to resolve the situation.

Refineries were shut down ahead of the switch to cleaner fuels in January. The government accused the fuel industry of not keeping enough fuel reserves, even though the new regulation were announced in June. Colin McClelland, director of the South African Petroleum Industry Association, admitted the fuel stockpile had run out but blamed motorists for worsening the situation by panic-buying of the fuel.