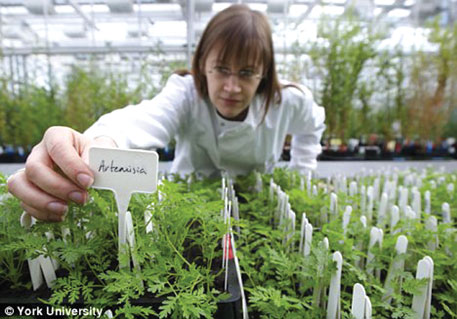 DRUG after drug has failed to control malaria, which kills and incapacitates millions in the developing world each year. A drug, artemisinin, derived from sweet wormwood (Artemisia annua), remains most effective against cerebral malaria, as the malarial parasite becomes resistant to most available treatments. But it is expensive and is frequently in short supply. A study has now shown that the powder of the whole plant is far more effective in treating malaria than artemisinin extract obtained from it. The powder delivers 40 times more drug to the blood than purified artemisinin and can provide a better and cheaper strategy to fight malaria.

The disease killed an estimated 660,000 people in 2010, according to WHO data. With an estimated 24 million cases per year, India has the highest malaria burden in South East Asia. Of all the four species of the malarial parasite, Plasmodium falciparum is the deadliest. It is now resistant to all commonly available drugs like chloroquine and quinine. There is recent evidence that it is turning resistant to artemisinin, the last remaining drug, too, in Cambodia, Myanmar, Thailand and Vietnam. And no alternative antimalarial medicines would be available for at least five years to come, warns WHO. It advises the chemical be used in combination with other drugs to avoid resistance. 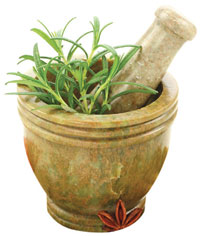 In this scenario, the study by scientists from the Worcester Polytechnic Institute and the University of Massachusetts in the US, has come as a relief. Published on December 20, 2012 in PLoS ONE, the authors state in the study, “We have found that a single dose of whole plant powder (containing 24 mg artemisinin/kg of plant weight) reduces the number of parasites in the blood of mice more effectively than a comparable dose of purified drug.”

Sweet wormwood is classified as “generally regarded as safe” herb. Its leaves find extensive use in Chinese medicine and are brewed to make a tea for treating malaria and fever in many countries. “Artemisia can be grown readily in most climates. It is a relatively simple process to harvest the leaves, pulverize them, test samples for their potency, measure out doses, and put them in capsules,” says Pamela Weathers, co-author of the study.

Stephen Rich, the corresponding author of the study, says in Western medicine, there is a strong tradition of using purified or single-component drugs to treat diseases but in practice purified drugs do not always work. It’s same as trying to isolate anti-oxidants from fruits.

“To get the benefits of anti-oxidants in blueberries, one has to eat blueberries. There simply is no effective blueberry extract,” says Rich. He attributes this to interactions between active ingredients and complex chemical entities present in blueberries, which make the active ingredients available to the body. “Our whole-plant Artemisia treatment is much like the blueberry example. We’ve proven that the whole plant kills parasites better than purified drug from the same plant,” he says.

Weathers attributes the effectiveness of the whole-plant treatment to the presence of other compounds in the plant, like flavonoids, with antimalarial abilities. Artemisinin, along with these compounds, creates a combination therapy that wards off the disease.

Commenting on the study, Thangam Menon, head of the department of microbiology at the University of Madras, says, “Traditional medicine uses crude preparations in cases where the effect is due to a combined action of more than one compound. Such an effect cannot be obtained with a pure preparation of a single compound.”