SEISMOLOGISTS say the two undersea quakes that struck near the Indonesian province of Aceh on April 11, 2012, could have been triggered by changes happening at the faults on the Indo-Australian plate of the Earth’s crust. The plate spans Australia, eastern Indian Ocean and the Indian subcontinent.

A study published in Nature on September 27, 2012, says the temblors this year have their roots in the devastating earthquake that shook Banda-Aceh in 2004. It says the 2004 quake boosted the deformations already present between the Indian and Australian zones of the plate. Such deformations occur in all the plates of the Earth’s crust and are a consequence of constant motion of the plates, a phenomenon known as plate tectonics. This motion ranges between 10-40 mm/year, about as fast as fingernails grow.

Matthias Delescluse, a scientist with Ecole Normale Superier in Paris, who is the co-author of the study, uses the analogy of a glass full of water to explain the occurrence. If the glass is full, even one water drop can make it overflow. He says the process of Indo-Australian plate deformation started millions of years ago. By 2004, the stress on this plate was at the threshold limit, like a glass full to the brim. The 2004 quake added to the stress, resulting in the earthquakes. “The 2004 quake somewhat precipitated the occurrence of all others between 2005 and 2012,” says Delescluse. 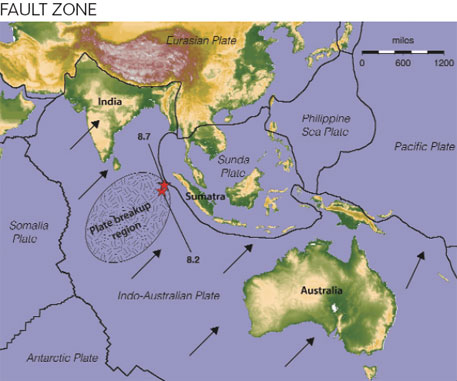 One of the tremors in April was the biggest strike slip earthquake ever recorded, touching a magnitude of 8.7 on the Richter scale. Strike slip earthquakes cause lateral movements in the crust and are, therefore, less destructive than quakes that cause up and down movements and trigger tsunamis. A strike slip quake can, however, conjure up major geophysical dynamics beneath the crust, as was demonstrated when the April quake led to major temblors worldwide. Quakes of 7-8 magnitude were recorded in Japan, Indonesia, California and Mexico.

This changed the widely held belief that earthquakes are local phenomenon and do not affect far away places. Rachel Abercombie, a seismologist at Boston University, says, “All those earthquakes were exceptional and this study investigates the causes behind them. The April quake occurred on the rupture zone of the Indo-Australian plate. It caused a 40 metre wide gap in the zone and ruptured the already existing fractures in the crust there, leading to other quakes.

Christine Deplus of the Institut de Physique du Globe de Paris in France says the Indo-Australian plate is moving towards northeast and is breaking up as its western side is colliding with the Eurasian plate and slowing down, while the eastern side continues to subduct or slowly move under the island of Sumatra, in Indonesia.

“It is similar to a motorcycle with a side car attached to it. If the side car runs into a wall, but the motorbike continues moving, it would create a huge stress and compress the side car against the wall,” says Deplus. The subduction in Sumatra caused the devastating earthquake and tsunami in 2004.

Fractures are also developing in the plate at the Wharton Basin in the Indian Ocean as the Australian part of the Indo-Australian plate is slowly detaching from the Indian part. “This can be compared to a violent impact detaching the motorbike from the sidecar,” says Deplus. The earthquakes in the region are, he says, a part of continuing expansion of the deformation zone at the plate boundary between India and Australia.