CSE warns no one is safe from deadly ozone pollution 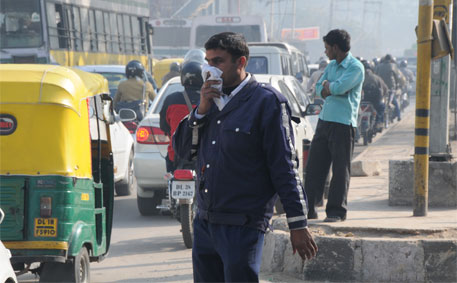 Delhi has witnessed significant ozone build-up this summer, which is adding to the public health risk, shows a latest analysis done by Delhi-based non-profit Centre for Science and Environment (CSE). Analysis of real time air quality data available from the key monitoring locations of Delhi Pollution Control Committee (DPCC) for the period April and May 2015 shows that the neighbourhoods of the rich and the powerful are highly vulnerable to deadly ozone pollution.

The ozone level in Civil Lines, where Delhi chief minister Arvind Kejriwal resides, is more than twice the standards and falls in the “poor” category of the National Air Quality Index (NAQI).

“Heat  waves and sunshine have increased the frequency of days with unhealthy levels of ozone with serious public health consequences. This could have been worse this summer if intermittent rains had not cooled down the weather occasionally,” says the non-profit.

Ground-level ozone is not directly emitted by any source. This is formed when oxides of nitrogen (NOX) and a range of volatile gases - primarily from vehicles and other sources - are exposed to each other in sunlight. Warm and stagnant air increases the formation of ozone. Ozone is extremely hazardous for human health. All neighbourhoods in Delhi – rich and poor – are at risk.

According to Anumita Roychowdhury, executive director, research and advocacy and head of CSE’s air pollution programme, “The high ozone level has made the cocktail of toxic pollutants deadly. Without a time-bound implementation strategy and preventive action, this can deepen into a serious public health crisis. It will spare neither the rich nor the poor.”

What has CSE found?
CSE has analysed ozone data from the automatic monitoring stations of the DPCC, located in R K Puram, Civil Lines, Mandir Marg and Punjabi Bagh - all residential areas - during the summer months of April and May 2015. This has exposed worrying trends in the city. To bridge the gap in official data for Lutyens’ Delhi and sensitive areas like hospitals, CSE used its own potable ozone monitoring machine to carry out limited monitoring in Lodi Estate in Lutyens’ Delhi and in the vicinity of the All India Institute of Medical Sciences.

Rapid build-up of ozone pollution in summer:
While ozone levels have increased steadily with the onset of summer, it doubled up very quickly in most locations as soon as the heat wave hit Delhi in the first week of May. On several occasions and at several locations, very high peak levels have been noted, close to 2.5 to three times the standards. Says Roychowdhury: “This is of serious concern as even short duration exposure to high ozone levels can cause great harm. This is one of the reasons why ozone standards are set for an eight hours average as well as a one-hour average.”

CSE’s own monitoring in Lodi Estate in Lutyens’ Delhi as well as the All India Institute of Medical Sciences (AIIMS) has brought out the vulnerability of these areas. During the day, the peak one-hourly averages frequently crossed the standards at Lodi Estate.

Near AIIMS, one of the nation’s premier medical facilities, the peak one-hour average has been recorded at 266 microgram/cubic metre between 12:00 noon and 1:00 pm. CSE researchers say the DPCC should carry out regular monitoring in sensitive areas as well as in Lutyens’ Delhi. Lack of air pollution data in this area breeds complacency among the rich and the powerful.

The months of April and May had several rainy days that reduced the ozone levels. But whenever a heat wave lashed the city, the ozone build-up has been very rapid. For instance, on May 13 this year, when it was raining the levels had plummeted to 13 microgram/cubic metre. But within two weeks, as the heat wave started to build up in the city, the levels shot up by 20 times. The city cannot depend on the rain gods for clean-up. It requires stringent action to reduce toxic gases at the source.

Why should we worry about ozone?
Ozone is an extremely harmful gas: just a few hours of exposure to it can trigger serious health problems. Ozone is particularly harmful for outdoor activities. This can have immediate health impacts, especially among those who are already suffering from respiratory and asthmatic problems – this is even for short duration exposure. Ozone worsens symptoms of asthma, leads to lung function impairment and damages lung tissues. Chest pain, coughing, nausea, headaches and chest congestion are common symptoms. It can even worsen heart disease, bronchitis and emphysema. It increases emergency hospital visits and admissions related to respiratory diseases.

Scientists inform that ozone is a powerful oxidiser, which means it can damage cells in a process akin to rusting. Children and the elderly are at special risk. There is a strong association between ozone and daily premature death counts, says CSE. Those with pre-existing diseases and lung diseases are at serious risk. Growing concentrations of nitrogen oxide and volatile organic compounds from combustion sources, especially from the explosive increase in diesel vehicles, is adding to the deadly recipe of ozone in hot and extreme climate.

What do other governments do?
Ozone is included in the daily smog and health alert programmes in countries such as Mexico, the US, China, among others. In Mexico City, the elderly, children and those suffering from respiratory and cardiac problems are advised to stay indoors when levels of ozone go up. The US-based National Research Council, part of the National Academies of Science, has recommended that local health authorities should keep the harmful effects of ozone in mind when advising people on polluted days. The US is now tightening the ozone standards.

A study by the University of Southern California and reported in Lancet, has found that in high-ozone areas the relative risk of developing asthma in children playing three or more sports was more compared to children playing no sports. Outdoor heavy exercise is not recommended as with every breath, one breathes in more pollutants -- athletes take in 10 to 20 times as much air, and thus pollutants, as sedentary people do. Hence, they are more at risk.

Need urgent action
Delhi needs much higher degree of health protection for all and especially the high risk groups, including the elderly, children, outdoor workers and people with asthma and lung disease. Cost of inaction can be very high, says Roychowdhury. The Delhi government must have its implementation strategy for priority measures in place before next winter:

On World Environment Day, CSE warns Delhi’s air pollution and congestion crisis will worsen this decade if urgent action is not taken